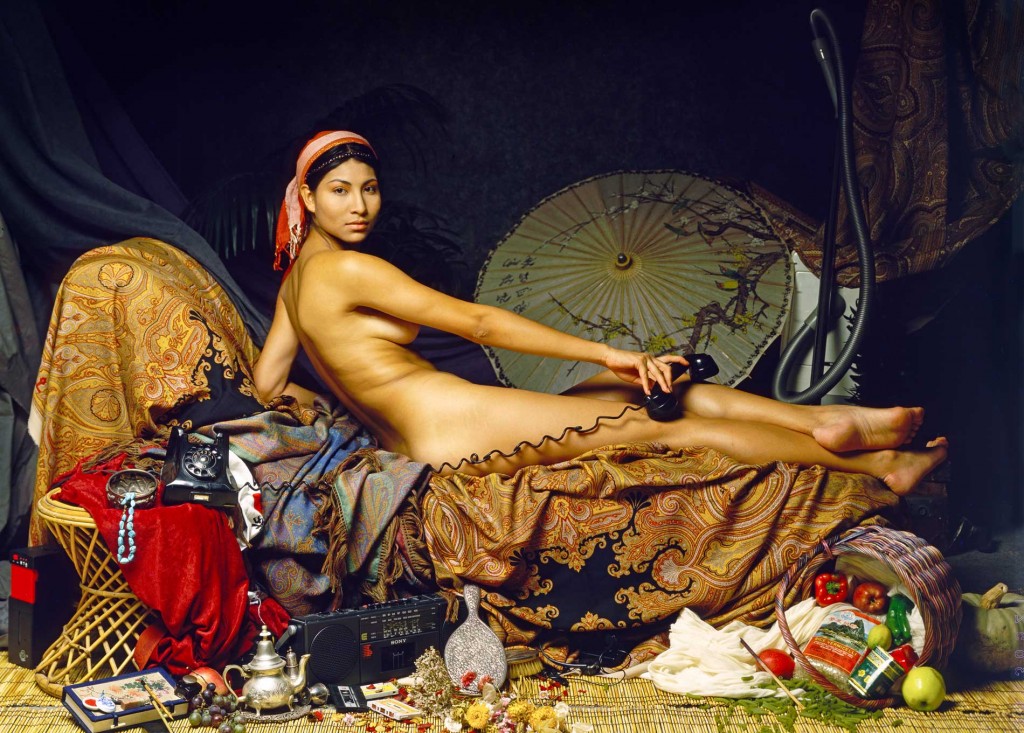 Casalisca by Patrick Nicholas based on “La Grande Odalisque” by Ingres

The second of the Belle series after the Homage to Corday. I had had in mind the idea of interpreting the Ingres’ Grande Odalisque for some time and I had even done a version with the same set, but the first model was not right. Then in 1989 a girl of a just eighteen happened by my gallery in Bologna. She had striking, enigmatic looks: in fact she was of mixed Chinese – Ecuadorian Indian blood – and very tall! She had left by about five minutes when I realised I had found my Odalisca! I ran down the street and caught up with her under Bologna’s two towers, waiting at the bus stop.

I dressed the set with things which I happened to have in the studio: the old fashioned phone (which worked and still does), the vacuum cleaner, feather duster, the shopping basket, the cassette player, but also more exotic things more redolent of the harem such as expensive Etro cashmere left over from a previous shoot. In this curious scene lay the beautiful Susanna, my Casalisca: part housewife (casalinga in Italian) part odalisca or courtesan; part modern, part timeless. 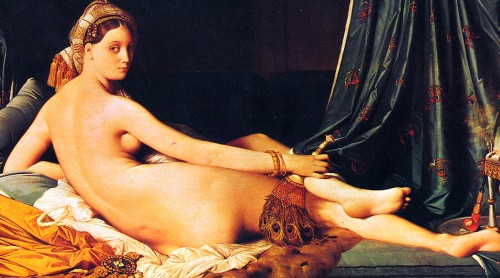 The make-up artist Carla and I, but above all Susanna, soon realised that the pose of the original was quite impossible – we had come up against the famous “three extra ribs” of Ingres. However despite the difficulty of trying to hold an impossible pose Susanna was so good that I took just two shots with a 4×5″ View Camera.

Susanna had this to say about the experience looking back on it nearly twenty years later for a magazine article.

“Posing nude for a photographer isn’t like standing naked in the middle of a busy shopping mall. We’re talking about something intimate that’s a lot less embarrassing. The result was different from what I had expected. It wasn’t the most flattering of shots: you could see folds of flesh in my side and I also felt my expression looked a bit vacant.  Patrick gave me a post card of my photo… I put it in a draw and forgot about it. Looking at the photo all those years later was a shock. There I was – after 17 years had gone by – all in my youthful innocence and strength. a new beginning, a story to tell; I realised that all the photos taken of me in these intervening years had never captured what was so natural in the postcard. I was how I was when I arrived in Europe. I’ve now got a big print and it’s proudly hanging on my wall. No one has ever given me such a precious gift.”