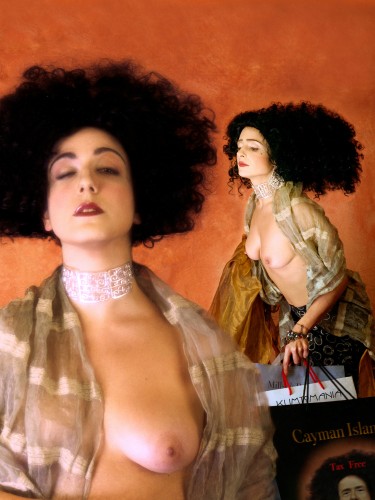 Klimt painted two versions of the bloody biblical story of the slaying of Holofernes by the Jewish patriot Judith, the second he painted after his visit to Ravenna where the Byzantine gold mosaics had a profound affect on his technique. In both versions Judith holds the decapitated head of Holofernes by the hair.

For the Symbolist, woman was desirable but threatening and often deadly -the wages of pleasure were illness and death from syphilis. Whereas in the eighteenth century artists tended to portray wayward men as being responsible, by the nineteenth blame seems to have shifted to women – possibly because the casualty lists among artists had lengthened to endemic levels.

Even before his visit to the Byzantine treasures of Ravenna, Klimt already seems to have been the sort of orientalist that makes forebears like Gerome and Ingres look like dilettantes. His work really is oriental, it is not just a depiction of a an oriental scene or a westernised odalisque. The combination of decorative arts with eastern sensualism makes Klimt truly radical.

Even his lifestyle reminds us of an Ottoman pasha. Of course he could not have painted what he did in Istanbul or Damascus: Vienna, on the East -West fault line was the only place in which his sort of genius could have flourished, and just in time too. Klimt died in 1918 at fifty-five, of a stroke brought about by Syphilis, the same year as the demise of the Empire he lived at the heart of. 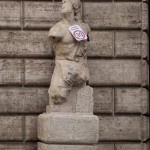 The Pasquino statue, Rome, denuded by an overzealous (or perhaps fearful) municipal ordinance.

When I was an art student in the early ’70s Klimt was popular amongst poster buyers along with Beardsley, Mucha and Jimi Hendrix, but not with the art establishment – perhaps the poster is the canary of the art world. I remember being struck by a single painting of his at the National Gallery in London 1976. It was rarely displayed and when I returned it had gone again.

Klimt made his daily bread as a portraitist and gave his sitters little choice but to acquire their dresses from Emilie Floge, his muse, lover and owner of a Viennese couture fashion house; this drew me to the idea of two women wearing the same dress. A friend made the silver chokers that are worn by both.

Rather like the Pasquino statue in Rome where Romans stick satirical verses , I use the carrier bag as a blackboard for ‘pasquinades’ or lampoons. Pasquino’s statue near Piazza Navona is constantly updated, Romans have as much to gripe about as ever.