Susanna and the Elders was a popular  Old Testament  subject with painters. There are innumerable versions by Rembrandt, Reni, Millet, Lotto, Van Dyck, and this one by Tintoretto, who curiously copied Susanna’s  pose from Giorgione’s Tempest, the serenity of which I have ‘borrowed’ for my version. 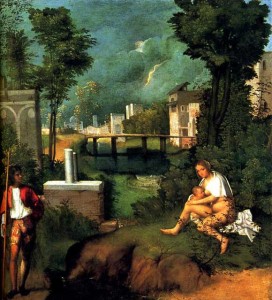 The story is salacious and there lies its appeal, but is also a story of attempted rape and the triumph of virtue. In my version I did not wish to create the impression that Susanna was being threatened, but admired.

I wanted to do a photo on the lake and this was the ideal subject. It was mid October but although a grey day, warm enough. I used a flash with a coloured gel to create something of the warmth of the original and enhance the baroque feel of a radiant subject in a wan context, but also to give the scene a crepuscular feel and lessen the melancholy of a grey lake in Autumn. 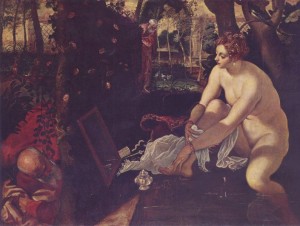 Susanna and the Elders by Tintoretto

Valentina had the form I was looking for, I am sure she would have appealed to the Baroque masters.
Mauro the fisherman who owns a cheap and cheerful restaurant on the shore of Lake Bolsena was enthusiastic when I asked him to participate; unfortunately he shaved for the occasion – the first time I’d ever seen him clean-shaven – so the make-up artist had  to paint his stubble back on again. Mauro’s family from the restaurant stayed to watch the show, we also had a Swiss film crew with us making a documentary.

I wished to avoid the menace of the Tintoretto so that although the pose is recognisably the same I wanted to set  a scene of enigmatic voyeurism. I sought a feeling of pleasing complicity between the man and woman, beauty and the beast. 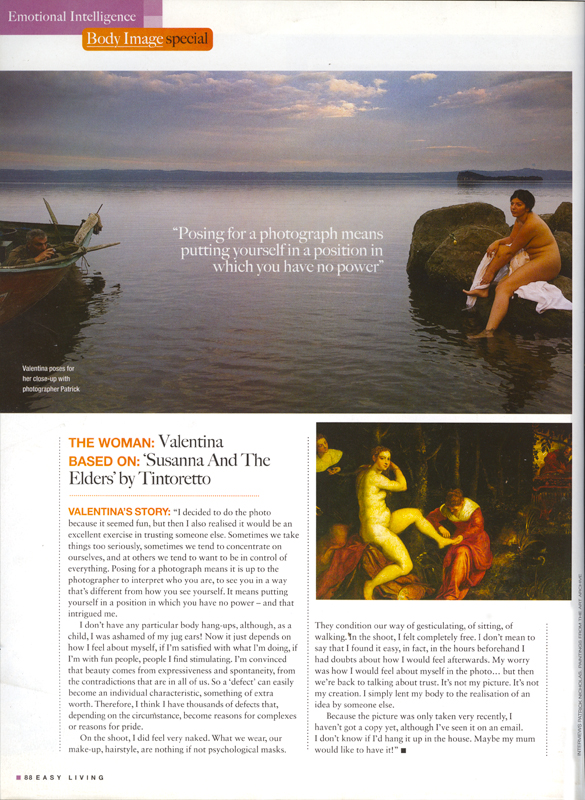 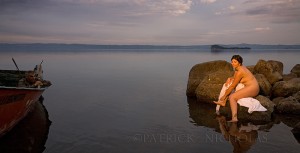 Technical Notes. Camera: Mamiya RB67 I used a spotlight (with an orange gel) on the model to create the effect of the last of the sun’s rays catching her skin, on what was a rather dull October afternoon, which you can see in the documentary. I stretched the distance between Valentina and the fisherman in Photoshop as you can see in this out-take.

Video: Watch a behind the scenes documentary by Swiss State TV RSI  here