Worship is an inaccurate word for the pagan rites that took place here, it implies adoration of an omnipotent God whereas the rituals that the Etruscans and others practised were more about celebrating oneness with nature and the cosmos. The deities could have been several: Turan, the Etruscan Venus; Minerva; or the male deity Fufluns, the Etruscan Bacchus. Bacchanalia are usually associated with the Romans (and parties organised by the Italian Prime Minister) but similar rites are common to all antique cultures and survive even today in aboriginal peoples. In pre-Christian Italy it was common practise to hold rites in a Sacred Grove. Making music was integral: drums, tambourines, castanets, pipes, trumpets and dancing to the point of ecstasy. Singing too, even yelling were part of the ritual. The ancient world was much darker and almost silent by modern standards – and a lot more dangerous; thus the sense of hearing would have had a much greater importance in respect to sight. A place like the sacred glade would have been chosen for magical rights because of its extraordinary acoustics. 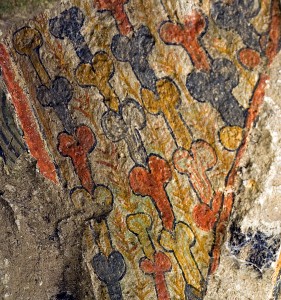 Scientists in the field of archeo-acoustics from Princeton University have recently found that the resonance found in caves, grottoes and amphitheatres like Stonehenge have a  frequency of 110 Hz which in turn has an effect on the left hemisphere of the brain, damping it and causing an asymmetry in the pre-fontal cortex leading to a predominance of the right side. The result is a diminution of the centres of language and a heightening of the emotions. This would have strengthened the emotional charge of those participating in mystical ceremonies.   If alcohol and possibly other drugs were added to the alchemy then it is easy to imagine participants becoming entranced and feeling they were passing from one dimension to another.

But what was the point? pleasure, orgiastic delirium? More likely the aim was to heal manifold problems and insecurities, a way of unifying oneself with the clan, the gods, all the forces of nature;  and with oneself, after all is there anything more complex than the mind of man himself? All non-monotheistic cultures anywhere in the world and in whichever period of  history have held these rites as a matter of course – except Western culture since some time after the first nominally Christian Emperor Constantine. When man divorced himself from shamanism he buried the secrets of aeons in the depths of his subconscious.

At its very least a Bacchanalia is a celebration of life, of living, of being truly alive.

This picture was taken at Poggio Conte on the border between Latium and Tuscany.