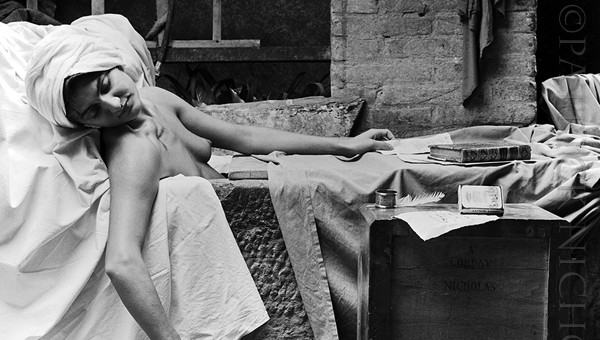 This photo, the first of the series was a response to a competition organised by an arty Café in Bologna. The model Soraya who bore a certain similarity to Marat in the original, was the first in a long line of willing, patient and extraordinary, ordinary women who have modelled for art’s sake. She brought with her not only ideas of her own for the picture but also a couple of objects to add as props, a tradition that I have continued to this day.

The competition was really  for painters which is why I chose to do a photograph that was based on a painting – a form of cross dressing  reflected in the fact that  Marat has become a woman. I did not set out to do a photographic copy of the David painting – what would have been the point? However using a famous image gave me the opportunity to say something new. 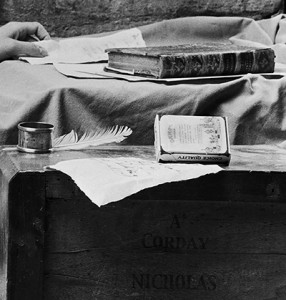 I did not go far to set the scene. My farmer neighbour Alfonso lent me his old laundry tub and the floor looked suitably eighteenth century. I used the beautiful Polaroid 667 negative film in the Mamiya 67 camera.

In this photograph I used the model to pay homage to Charlotte Corday  the neglected, absent figure in the painting – Marat’s assassin. Sometimes an image can carry such an extraordinary power that it becomes known as iconic. Examples are of course Christ himself on the cross, the raising of the flag at Iwo Jima, Botticelli’s Venus, Leonardo’s Mona Lisa to name but a few. David’s Death of Maratis another such celebrated image and the most famous painting of the French Revolution. David was a friend of  the revolutionary Marat, an admirer of Robespierre and by association a supporter of The Terror in which maybe 40,000 died. 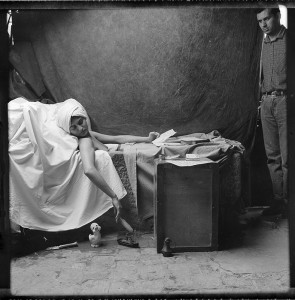 Adriano Tetti, friend and collaborator surveys the scene. The first versions had a backdrop

He had visited his friend the day before the assassination and was thus able to paint the scene exactly as he had seen it – but although he included the knife the assassin is absent, implying she tried to escape. She did nothing of the sort.

Corday was an extraordinarily brave woman who knew she would be guillotined, she did not risk her life, she offered it.  She sought to rid France of a mass-murdering monster who had betrayed the revolution and the people. She had her portrait drawn for posterity in her prison cell only two hours before her execution, she was just 24 years old. The executioner’s assistant slapped her decapitated head in his rage, whereupon the severed head opened its eyes! The crowd gasped. He lost his job – for conduct unbecoming of an executioner. 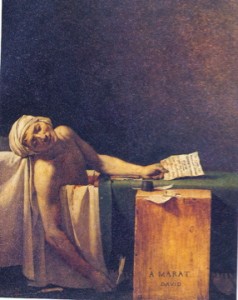 The painting by David was so brilliant in it’s simplicity with it’s pose reminiscent of Michelangelo’s Pietà, that it became a revolutionary icon. Often copied it was used to elevate the hero-worship of Marat to almost ecstatic heights. If only the naive girl had killed the loathsome Robespierre. Sadly, Charlotte Corday became a heroine to the monarchist party she had despised. David did not portray his friend with a scabrous skin disease and Marat did not in fact die in his bath, but expired on the stairs. The bath itself is now in the Grévin Wax Museum in Paris.

My photograph was conceived as a light-hearted parody, but I feel that since I took the picture  Charlotte Corday has taken on a life of her own.