Flying Down to Rio – background details

Some of my pictures have been shot in the studio or more often in some one’s sitting room and the background added afterwards. Photo-purists can bale out at this point.

On occasions I know from the outset that elements will have to be added later,  Bernarda and Galèt (right) for example. 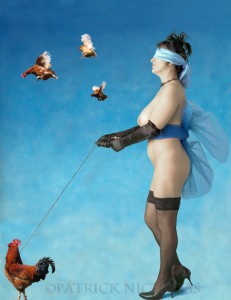 Others were shot with only a vague idea of how the picture was to develop with sometimes weeks separating the original shoot and the ‘bing’ of revelation that a certain background should be added.

Bernarda was shot on a blue ground in the middle of winter and had to be done quickly to advertise the fact that the Belle series were about to appear in a newspaper. The boat on the lake was shot separately and proved one of the most nightmarish separations I have ever encountered with each blond hair having to be ‘painted’ individually onto the lake background.

Galét proved to be impossible to shoot as I had intended with the model’s dog taking on the walk-on part previously occupied by the Rops porker in Pornokrates. The frisky Alsation just refused to co-operate and was rudely hustled out of the studio. We tied the lead to a light stand and I thought I could add an animal later at my leisure. In the event I think the rooster makes for a more light-hearted image than the dog as well as adding a certain double-entendre to the image that saucy post card artist Donald McGill would have approved of.

Danae was shot without an idea at the time of any background other than plain black. It was later when reading more about the Danae myth I learned she had been imprisoned in a tower or even in a well and thought of using a shot of St Patrick’s well in Orvieto as the background.
Correspondent was shot against a black back-cloth and I cast around later for a suitable ruin and eventually photographed an ancient Roman bath at sunset.

Flying Down to Rio was almost discarded. I had not felt that it had really worked and that the work necessary in Photoshop was not worth the candle. It was the Rosy the model who picked it out from the others. After labouring long in Photoshop, I felt that the image was finished and accordingly posted it on my blog in December. However, shortly after, I saw a photo of a ceiling in the Gaudì house in Barcelona 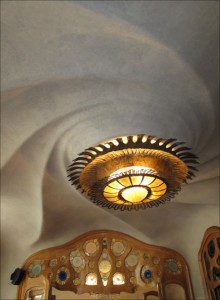 on a blog post by Thomas Peck, so impressive that I thought it could add something to my image. I contacted the photographer, whom I have never actually met, who kindly sent me a Hi-Res copy of his photograph.

It is curious how the craft of the painter has encroached on that of the photographer over the last twenty years or so, from when Photoshop introduced layers in PS3. None of the above  manipulations of the image would have been possible without using Layers.Like the painter the photographer can now realise an idea without recourse to a reality ‘out there’ and furthermore without a complicated and expensive studio set. This revolution is comparable with the replacement of egg tempera by oil paint in the 15th century. Oil paint had been around for a long time before it was hit upon by the Dutch, it was invented in Afghanistan, admittedly for shield painting, 1,500 years ago; not a part of the world we normally associate with the avant-guarde. 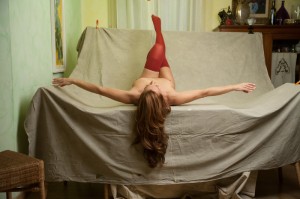 on her dining table

Many thanks to Thomas Peck whose funny, entertaining and well illustrated blog I thoroughly recommend; and of course Gaudì, without whose genius art lovers the world over would be a lot poorer. The building Thomas photographed, Casa Batllò, is up for sale. An eight storey work of art that you can actually live in and show off not only to all your friends and aquaitances but the world at large, is I would say, a snip at  €10 million; the same price  as two Andreas Gursky photographs and a Cindy Sherman. I know where my choice would lie, even though it would occupy a lot more space.