This photo was taken in 1989 and inspired not by work of art but an aftershave advertisement. I have blogged it because this picture taken over 20 years ago has become topical.  The caption reads,   ‘Men’s Perfume, Stories about Women’. I built a set as best I could with five friends who helped me carry heavy blocks of concrete up to the  first floor studio. I then invited women friends who in turn invited their friends for the shoot, and so many women turned up that at least two thirds became the audience.
To create the steam bath atmosphere I hired a smoke machine that was so over the top that we couldn’t see a thing and had to throw all the windows open.
We had a ball! 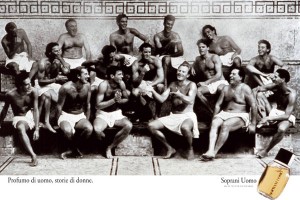 Storie di Donna – Stories about Women; a magazine advert from 1989

I was reminded of this almost forgotten image by newspaper stories concerning telephone intercepts of conversations between the girls involved in the ‘bunga bunga’ scandal in Italy. The next court appearance in Milan is scheduled for May 31st; Berlusconi has already said that he won’t attend, will anyone else? Will he get off scot free as he always has done up till now? Whatever else the public expects more saucy revelations.

For those not in the know, a chipolata is a very small sausage.