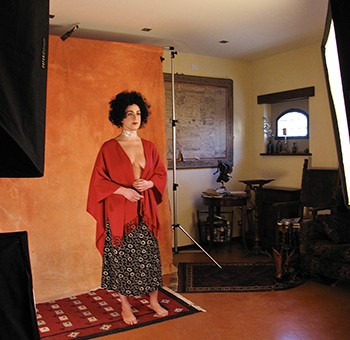 What is it like to pose for one of the Belle? Here is Katia’s humorous story.  A young journalist from Australia of Italian origin she posed for Correspondent and also for Klimtomania with  fellow Australian, her friend Daniella also of Italian origin.
I stand, naked, with a bright red pashmina to cover my bits while the shot is being set up. I’m not even fully exposed yet and I can feel cool beads of sweat rolling down my inner arms. I look around the room at everything except the camera that stands ominously before me.
I’m in a restored farm house in the countryside of Bologna, Italy, surrounded by knick-knacks and furniture that date back to the 18th century. I really should be more appreciative of such authentic and historic props but my mind is elsewhere.
Glancing down at my breasts I think that a little ice wouldn’t go astray. Hot from the lighting focused on me from all sides, they sit just a little too deflated – a reflection of my confidence at this point, really.
The photographer announces he’s ready – but am I? No time to ponder. I feign absolute confidence, gingerly unwrap myself from my scarlet security blanket and toss it to the side. I remind myself that the eyes of the photographer aren’t trained on my bits but on the whole scene. The “artist” sees the overall picture, it’s the perverted boy-next-door who just sees my jugs.
I seat myself carefully on the chair and stretch my legs out in front of me, trying to look as lean and graceful as possible. However this sitting position isn’t the most flattering on my belly; it sits rounded and warm like a freshly baked pudding, soft to the touch.
I can feel the eye of a video camera hover over my exposed self (I’m informed earlier that doco footage is always taken during these shoots). I say a prayer that I don’t end up on the internet as dodgy porn – I can see the crass title now: Busty Babes of Bologna. I’m awoken from my thoughts by the photographer’s instructions of how he wants me to rest the old-fashioned typewriter on my lap. I’m a war-time press correspondent, stripped bare, reporting from the darkness of a basement on the horrors I’ve seen…
How I found myself posing in my birthday suit for an art photographer in Italy I still can’t believe, because I’ve never been one to flaunt my body. Growing up I was the tall, large-boned wog girl with puppy fat while my sister scored the lean dancer’s body. I couldn’t’t help but compare myself to her, therefore my whole life I’ve felt “big” and ungraceful. Like one of the boys.
I remained self-conscience of my body over the years. Who can forget the shop assistant who commented on my “nice fat back” while trying on some pants (and don’t ask me why but I still bought them).  I’d make my mum turn away when I tried clothes on in a change room; at home I’d cover my breasts if my nonna walked in on me getting dressed. The silly actions of a teenager? No – this was in my early twenties.
Despite my preoccupations and body hang-ups I’ve always loved artworks of the human form – bold portraits of naked Renaissance women in all their curvy glory, or sculptures where a pair of hands have moulded a face out of clay or chipped a chest out of cool marble. I always wonder who the subjects of these beautiful pieces of art are and what their story is.
It was while flipping through a magazine that I came across a spread of photos titled The Paint Strippers; Italian housewives who had been immortalised as classic beauties from world-famous paintings, ranging in style from the Renaissance era to art deco.
They were normal-looking women of all ages – and not a size 8 in sight. I was in awe not only of these beautiful classic photos with their contemporary twist, but of these women who seemed to radiate a peaceful confidence in their skin. 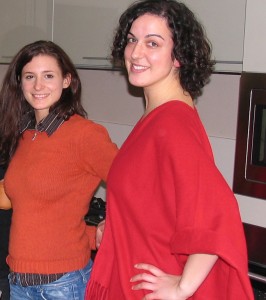 In that split second, without a moment’s hesitation, I knew I wanted to be involved in this photographer’s work. I wanted to feel womanly, natural, beautiful… feminine. I wanted to push past my insecurities and there seemed no better time. I was 25, single and living abroad, far away from everyone back home who really knew me and my hang-ups. I could be anyone.
Patrick Nicholas was the man behind these splendid photographs, a British fellow who had moved to Italy 23 years ago to pursue his love of photography in a land steeped with culture and history. He’d been doing these re-interpreted works of art on and off for nearly 20 years and welcomed my interest with delight. We soon met each other one weekend in Rome and agreed on a Gustav Klimt painting where half of my chest would be exposed in the photo.
I told only the women of my family my plans to pose naked in Italy. “Mum, it‘s art, not porn,” I reassured her over the phone. “It’s a brilliant concept. His photos are syndicated around the world – there’s the chance I may end up in a coffee table book or hanging in a gallery one day”… Mum was not sold. I refrained from telling my grandmother.
I wasn’t sure if Nonna Maria would understand. I tell you what, the Italians keep phone companies in business. I’ve seen how the older generation – my nonna included, possibly as their leader – whisper and shake their head in disapproval at the shamelessness of women today. The last thing I want is small minds to think my parents bought up a wayward daughter, to talk viciously about what scandalous activities I was getting up to in London.
However by doing these photos I’m also quietly giving the one-finger salute to a generation that stifled a women’s sexuality with religious fears and moral oppression. My nonna, with her huge boobies that all the boys loved (her words) would have been great in such photos, but it could never have been done. She would have been “a disgraziata.”
Would I be seen the same?
As much as I knew I was meant to look curvy and natural in my photo, I had visions of myself immortalised in art as a size 10 – a size I don’t ever recall being, to be honest. So three weeks before I was due to fly to Italy I gave up sugar. Chocolate, cookies, cakes… I resisted them all – for about a week. Depressed from my lack of discipline I consoled myself with tiramisu.
A week before the shoot I booked myself in with Carmen, my Scottish beautician who could wax like the wind. “Take it all off,” I instructed. Not one unnecessary bit of dark body hair was safe, and I walked out of the salon feeling chilly but pristinely smooth and poised for the picture.
Yes, I was ready…until Patrick emailed me a picture of a different painting. “I thought we could try this one instead – the resemblance is remarkable,” he said. Titled The Reading Girl by Theodore Roussel, it was a painting from the 1800s of a woman sitting stretched out in a chair, reading. In the buff. Without a scrap of clothing – not even a seat cover between her buttock cheeks and the chair…
Full-blown nudity was not discussed. I could handle a breast or two… but now? Anxiety set in and my teenage insecurities flared up again. Did I really want to reveal all my imperfections? Every curve of me, captured in a photo, to serve as a constant reminder that I was never really as thin as the other girls my age…
And this is how I found myself naked in front of a camera in an old restored farm house in Italy. Or to cut that sentence short – this is how I found myself.

In the final photo I see a serene calmness in me, as though it’s the most natural thing in the world to be stretched out with an old typewriter pressing heavily into my naked flesh. I suddenly see the beauty of the female form in myself and I feel vulnerable but powerful at the same time, if that’s possible.

Self-perception is a funny and often totally off-the-mark thing, distorted further by the current obsession with what a bit of cosmetic surgery can change. I had hinted to Patrick that “my boobs could be a bit rounder…” and upon seeing the final pic I thought with satisfaction that my photo-shopped breasts now looked normal.
Imagine my surprise when Patrick told me he hadn’t changed a thing. “You’re exactly as Mother Nature intended,” he said. I found myself smiling, quite shyly, as I was able to now look at myself more objectively. I recognised me in the photo, no manipulations, no air-brushing… and it was a revelation.
In stripping off my clothes I stripped off a layer of self-loathing I had for my body. In exposing my breasts I also exposed to those who know me that I’m perhaps more in touch with my sexuality than I lead them to believe. I feel neither shame, nor embarrassment. I feel like a woman. And I suddenly don’t care who sees my photo. In fact, I’ll show it myself.
Would I do it again? For art, yes. For a bloke’s mag? Probably not – but the whole “posing nude” area doesn’t seem so black and white anymore. Some might say what I’ve done is just glorified porn but I don’t feel objectified – I feel appreciated, and I think there’s a difference.
I love the fact that one day I’ll be able to show my children just what their mother did in her day, before her breasts were knocking at her knees and she could just about take off in flight with her bingo wings.
I’ll just have to make sure they don’t mention it in front of my dad – Papa Sanfilippo would never understand.
© Katia Snfilippo 2009
Watch a behind-the-scenes video of the shoot with Katia and Dani  here
By Patrick Richmond Nicholas November 15, 2010 Behind the Scenes, Belle, Belle Indoor, Posing Leave a Comment Tags: Belle, correspondent, Katia Sanfilippo, klimtomania, Patrick Nicholas