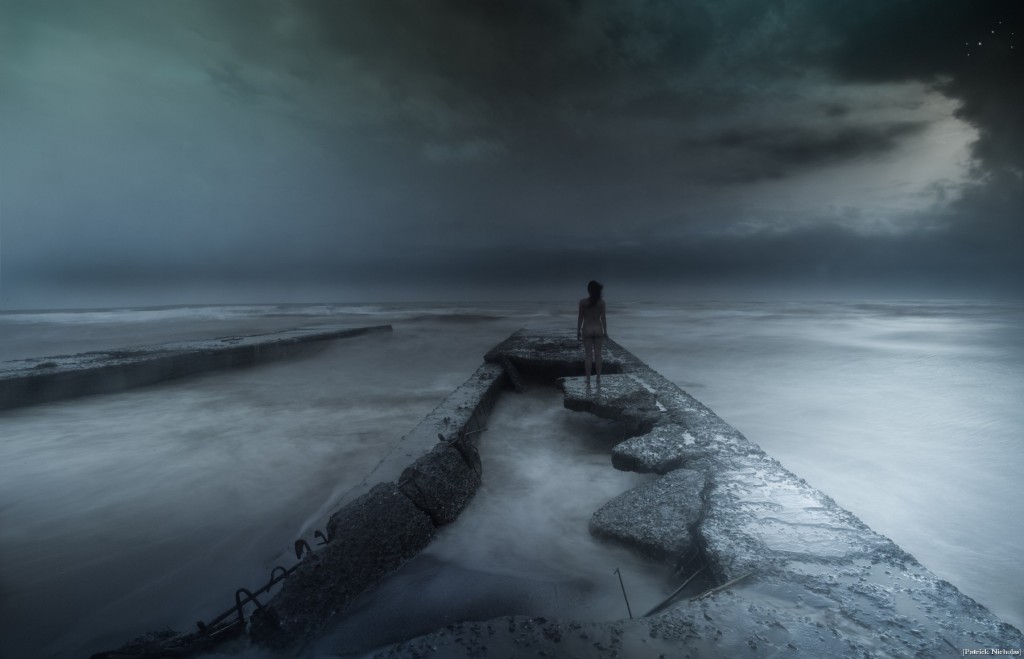 Several things came to mind in this bleak and stormy place. I grew up by the sea, my father was in the navy, he used the expression ‘on the beach’ meaning never to go to sea again, career’s end.The desolate concrete pontoon reminded me of the cover of Nevil Shute’s book On the Beach about a group of individuals waiting for a spreading nuclear cloud from the Northern Hemisphere to overcome the last surviving humans in Australia.
I thought of The French Lieutenant’s Woman, the heroine standing forlorn on the Cobb at Lyme Regis.

This is the time of year when the ancient Greek poet Hesiod warned seafarers to haul in their boats as the Pleiades appeared in the autumn sky, the stars known in mythology as The Seven Sisters.

And if longing seizes you for sailing the stormy sees,
when the Pleiades flee mighty Orion
and plunge into the misty deep
and all the gusty winds are raging,
then do not keep your ship on the wine-dark sea
but, as I bid you, remember to work on the land.

A woman stands alone on the beach, but in actual fact she is not alone. She remembers when she was little, standing weeping on the beach holding her father’s hand as the autumns storm rolled in obscuring The Pleiades. The stars will emerge again, he reassures her.
In Whitman’s poem On the Beach at Night a father and little daughter are staring up at the autumn sky. She weeps in fear of the gathering storm, he comforts her, removes her tears, reassures her that the stars will not be long gone; more than this he assures her of something older than the stars.

On the beach at night,
Stands a child with her father,
Watching the east, the autumn sky.

Up through the darkness,
While ravening clouds, the burial clouds, in black masses spreading,
Lower sullen and fast athwart and down the sky,
Amid a transparent clear belt of ether yet left in the east,
Ascends large and calm the lord-star Jupiter,
And nigh at hand, only a very little above,
Swim the delicate sisters the Pleiades.

From the beach the child holding the hand of her father,
Those burial-clouds that lower victorious soon to devour all,
Watching, silently weeps.

Weep not, child,
Weep not, my darling,
With these kisses let me remove your tears,
The ravening clouds shall not long be victorious,
They shall not long possess the sky, they devour the stars only in apparition,
Jupiter shall emerge, be patient, watch again another night, the Pleiades shall emerge,
They are immortal, all those stars both silvery and golden shall shine out again,
The great stars and the little ones shall shine out again, they endure,
The vast immortal suns and the long-enduring pensive moons shall again shine.

Then dearest child mournest thou only for Jupiter?
Considerest thou alone the burial of the stars?

Something there is,
(With my lips soothing thee, adding I whisper,
I give thee the first suggestion, the problem and indirection,)
Something there is more immortal even than the stars,
(Many the burials, many the days and nights, passing away,)
Something that shall endure longer even than lustrous Jupiter
Longer than sun or any revolving satellite,
Or the radiant sisters the Pleiades.

On the Beach at Night  by Walt Whitman

I would like to reassure my eleven year old daughter that I will always be with her, standing beside her for the rest of her life; as long as she remembers me I shall be there in spirit. Love the great survivor, spreading like a radio wave out through the universe beyond Jupiter and the Pleiades for ever and ever, a father and daughter holding hands till kingdom come.