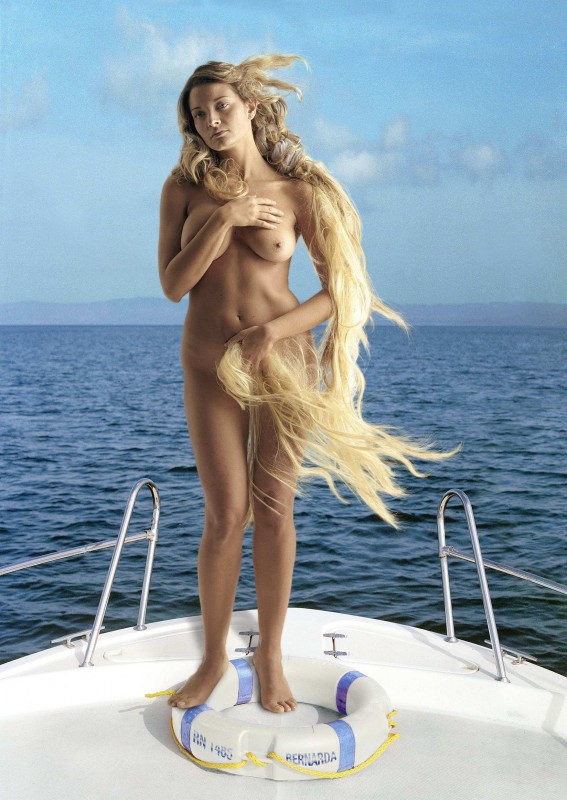 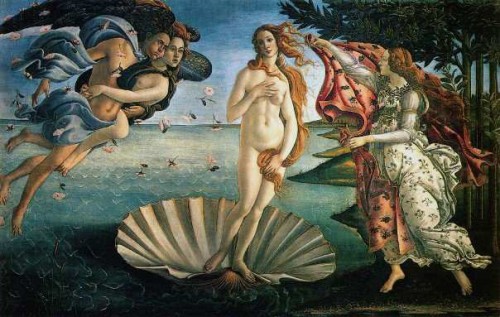 Botticelli’s Birth of Venus is one of those paintings that is immediately familiar even to those who know little or nothing of art. For this reason it was chosen to launch the series “Le Belle nell’Arte” in an Italian regional newspaper based in Rimini. The image was so instantly recognisable that explanation of the project was reduced to the minimal, “Would you like to become a work of art?” The newspaper printed the photo on the front page alongside the Botticelli original with an appeal for women to come forward to participate in the re-interpretation of paintings by old masters.

Botticel I i was more than a painter, he was something of a magician. He worked in close collaboration with the hermetic philosopher Ficino to create magical paintings, works of art that had an effect on the viewer. The proportions, the landscape, the beauty of Venus herself, the sexual symbolism of the shell, all the elements combining to conjure down to earth the cosmic spirit: Venus in harmony with Mars, the lion lying down with the lamb.

As with subsequent photos I reduced the original painting to its essentials: in this case eliminating the peripheral figures and then adding the contempoary, ironic details of the boat and the life-belt carrying the name ‘Bernarda’ (a woman’s name that in local dialect would correspond to ‘Fanny’ in English). The number on the belt, 1485, refers to the date of the painting. As with several other famous paintings – Ingres’ Grande Odalisque is a notable example – the pose is impossible and no doubt intentionally so: the neck is too long and the angle of the head unnatural. 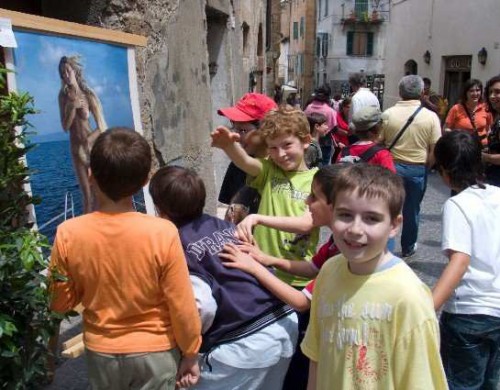 Juvenile enthusiasm for art outside the gallery in Orvieto

The model, Rosaria Russo, a young final year law student at Bologna University and part—time actress, was chosen owing to her striking resemblance to the original. Her patience and good humoured perseverance during a long, chilly and difficult shoot (the hairdressing and make-up alone took three hours) was no doubt attributable to her naturally strong character. When asked to describe the experience of posing for this picture to a British woman’s magazine she said “At first I was rather nervous about being completely naked, but then I thought that it wasn’t about ‘gratuitous’ nudity. And then there was something that struck Patrick about my body. I have a big scar on my tummy, on the right side, which I’ve had since a surgical operation 9 years ago which without doubt changed my life. That’s why I’m very proud of it and why I have never contemplated plastic surgery to remove it.

This scar is important to me and I’m absolutely not ashamed of it. Patrick was inspired to do a different Venus – a Venus who’d lived, scarred!” The scar is visible on her right side partly covered by her hand.

The photo stands on an easel outside the

doorway of my gallery and I am thinking of setting up a webcam to record the reactions of the public, surprise, nudges and winks, catcalls, outright laughter, it often stops people in their tracks: no other picture of mine has the same effect.