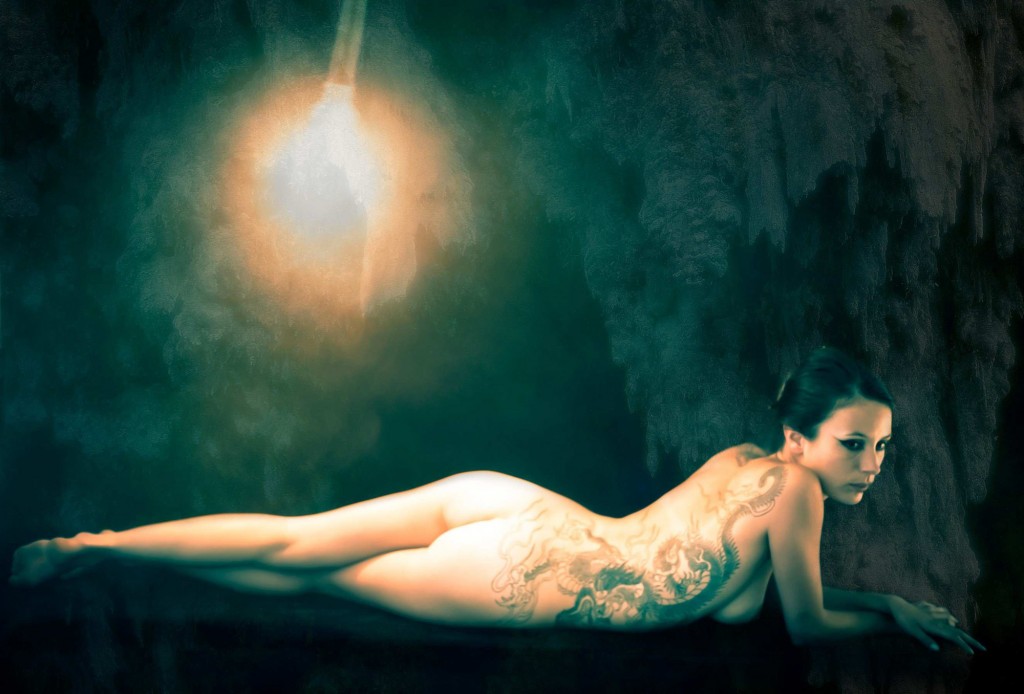 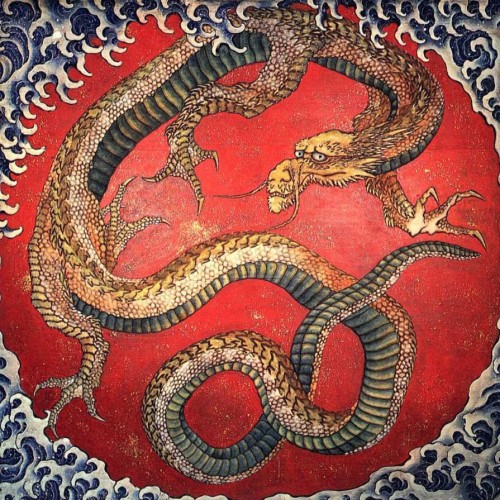 The Dragon was prompted by Pauline’s wonderful tattoo of a Japanese dragon. Personally I’m not all that keen on tattooing but in this case I felt I’d met someone who had a work of art on her back. This image was realised shortly after the Japanese earthquake and the nuclear disaster that followed at Fukushima; I felt that in some way that here was an opportunity to illustrate that calamity. I have only witnessed an earth tremor once, in 1984 in Modena. A wave moved up the wall and the lightbulb swung from the ceiling – not really an earthquake but an extraordinary sensation which I have never forgotten. In the end I was drawn again to Hokusai to his calamitous picture Great Wave at Kanagawa but also to his dragon. The oriental dragon is at the antipodes of the western and whereas our dragons are to be slain, the eastern is a positive creature or at least has positive qualities. The oriental dragon is a water creature as seen in Hokusai’s picture, surrounded by waves, rather apt given the tsunami which followed the earthquake. Why the Japanese of all people thought it wise to build an atomic reactor in a highly seismic country right on the coast where Tsunamis are relatively common beggars belief. The radiation released was 30 times the radiation of the Hiroshima bomb. Perhaps it just goes to show that very clever people are capable of doing very stupid things. Fukushima is about 200 km from Kanagawa.
I have an affinity with dragons. An ancestor of mine, John Somerville, slew a dragon in Linton in Scotland in the 12th century. I am an ‘Old Dragon’ having been to the Dragon school in Oxford and where my grandfather taught for many years. I was born in 1952, in the year of the Dragon. In fact the dragon is the only mythological animal in the Chinese zodiac and the most powerful, being the harbinger of wealth, good luck and … sagacity. Chinese and Japanese couples will be doing their utmost this year to conceive a male child – next year is the year of the Dragon.
In Italy a nuclear power station was built on the Tuscan coast in the ’80s (not 20 km from the epicentre of a major earthquake in 1971), but was converted to coal after a referendum rejected nuclear power in the wake of the Chernobyl disaster. In 2010 the Berlusconi government riding roughshod over the 1986 referendum decreed the reinstatement of nuclear power. The opposition called yet another referendum which was scheduled to be held in June 2011, thus it took place just three months after Fukushima and nuclear power was yet again rejected: the sort of timing which makes one think that perhaps there is a force for good in the universe.