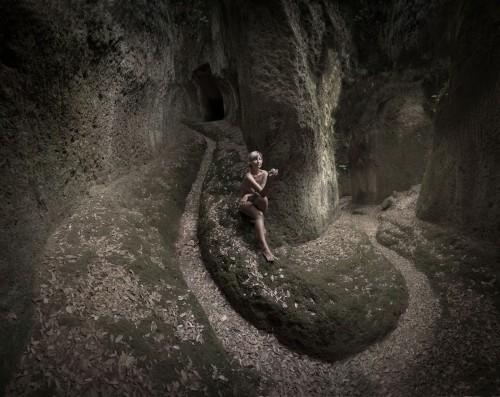 Many of my images are set in the landscape of an area of Italy known as Tuscia, the land of the Etruscans, the civilisation that preceded the Roman and whose legacy runs through the veins of the civilisations that inherited this country. In southern Tuscany there are three towns, Pitigliano, Sovana and Sorano around which the Etruscans hewed mysterious, meandering paths deep into the rock. Some are very deep indeed, as much as 15 metres with tunnels and lesser paths leading off them. Were they used for initiation mysteries and if so, why only in this particular part of Tuscany? There are several underground Etruscan labyrinths but these serpentine paths open to the sky are unique to this area.

The labyrinth is common to all ancient cults, that of the Cretan Minotaur the most notable. This location, the Via Cava of San Roco may well have been a form of labyrinth. The sacred ways have fallen in over the millennia but it is still possible to see the adze marks on the lower walls. 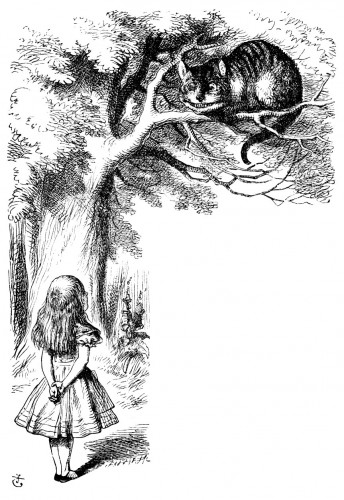 Alice in Wonderland with the Cheshire Cat

These are not visible at the top, evidence that they must have curved over to almost meet at the top letting in little light indeed – what a perfect atmosphere for mystery initiation.

My parents were married and I was baptised in the church of St Aldate’s opposite Christ Church College, Oxford where my great-grandfather had been cannon and where ‘Dodo’ Dodgson, Lewis Carroll, lived and taught. Alice has been with me as long as I can remember.

One of my first jobs was as a stagehand at the Oxford Playhouse where I worked on a production called Borges and Myself. At the first night I met the man himself, by then almost blind but of powerful presence, and he signed my copy of Labyrinths.

The model’s name is Alice, she comes from Prague, speaks four languages fluently but works in the tiny, damp ticket office of St Patrick’s Well in Orvieto, glad to have a job certainly but ever so keen to find her way out. Stuck like K in the labyrinth of Kafka’s Castle. Perhaps if she read Alice’s Adventures in Wonderland she would realise that adventure was its own reward.

‘Would you tell me, please, which way I ought to go from
here?’
‘That depends a good deal on where you want to get to,’
said the Cat.
‘I don’t much care where–‘ said Alice.
‘Then it doesn’t matter which way you go,’ said the Cat.
‘–so long as I get SOMEWHERE,’ Alice added as an
explanation.
‘Oh, you’re sure to do that,’ said the Cat, ‘if you only walk
long enough.’

from Alice in Wonderland by Lewis Carroll

In the lower part of the step, toward the right, / saw a small iridescent sphere of almost intolerable brilliance. At first / thought it rotary; then / understood that this movement was an illusion produced by the vertiginous sights it enclosed The Aleph’s diameter must have been about two or three centimeters, but cosmic space was in it, without diminution of size. Each object … was infinite objects, for / clearly saw it from all points in the universe.

from The Aleph by Jorge Luis Borges