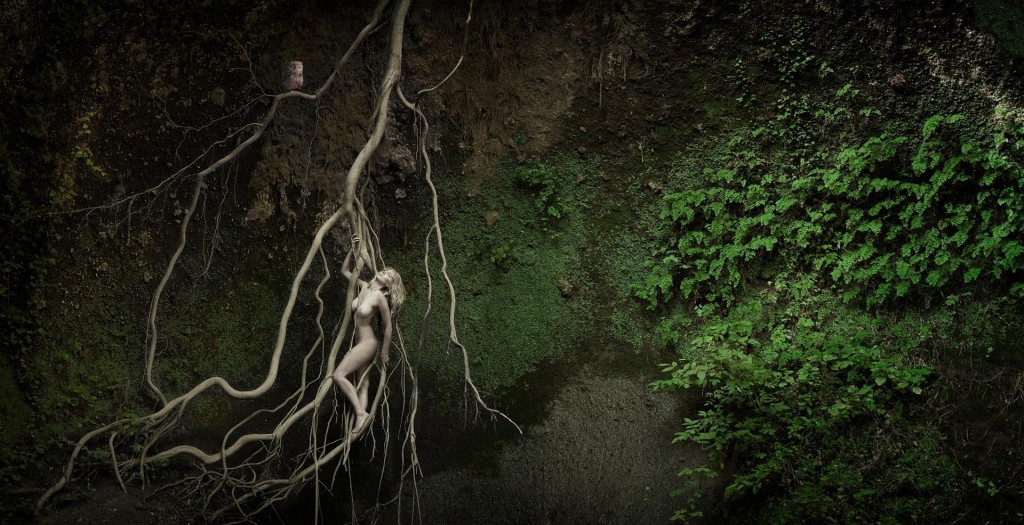 On the borders of Tuscany and Latium in a sparsely inhabited area that was once densely populated until scythed by malaria, there is a mysterious place hidden in an ilex wood that I call The Sacred Glade, a large natural grotto narrowing at the top from where the sunlight filters down through the canopy of trees, the roots of which have been exposed as the cliff face crumbles. 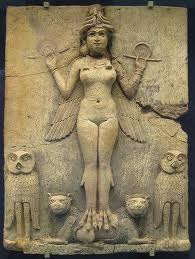 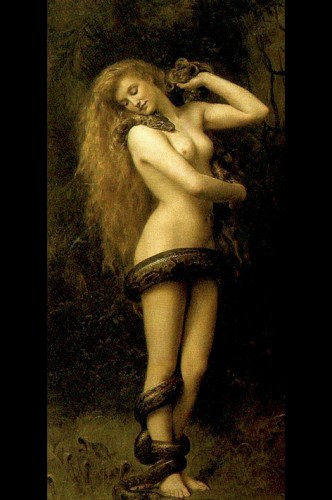 In the walls are Etruscan tombs, and high up the cliff a tiny Templar church, an erstwhile Etruscan temple, has been cut into the rock. Almost all the frescoes are now in a museum but on the ceiling can still be seen bizarre and mysterious symbols. This grotto is the location for Lilith where her tresses interlace with the roots like a celtic braid.

Lilith’s origins are Babylonian (1, British Museum), she re-appears in the Bible as Adam’s first wife, but is banished childless after claiming equality with him. She is portrayed as a snake and as such returns as the temptress (2, Collier).

A demon, a stealer of husbands and children (3, Lippi), an evil beguiling witch. Depending on the age and culture, fear of Lilith waxes and wanes. Generally the more sexually repressed the society, the more she is seen as demon and servant of Satan.

The less mankind is at harmony with his female nature the more demonic Lilith becomes, conversely a man at peace with his ‘feminine’ subconscious sees Lilith as his muse. 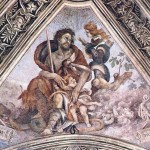 3. Adam protecting his children from the clutches of Lilith, the child stealer. 1502

Residing in shadows she is the unconscious, the female nature within man – inspiring, disquieting, even threatening.The unconscious mind is unaware of time, feels rather than reasons, and perhaps has roots extending so far into the past that it is pre-human, pre-sexual, androgynous, eternal.

Associated with the moon’s dark phase, Lilith drifts in and out of men’s affairs under various guises, Hecate, Diana, Minerva, Persephone, the white goddess; she is the moon that is there but cannot be seen, her moonlight shadow stretches over all the women in this book.

Of Adam’s first wife, Lilith, it is told
(The witch he loved before the gift of Eve,)
That, ere the snake’s, her sweet tongue could deceive,
And her enchanted hair was the first gold.
And still she sits, young while the earth is old,
And, subtly of herself contemplative,
Draws men to watch the bright web she can weave,
Till heart and body and life are in its hold.
The rose and poppy are her flower; for wherels he not
found, O Lilith, whom shed scentAnd soft-shed kisses
and soft sleep shall snare?Lo! as that youth’s eyes
burned at thine, so wentThy spell through him, and left
his straight neck bent
And round his heart one strangling golden hair.