Venus of the Sherds 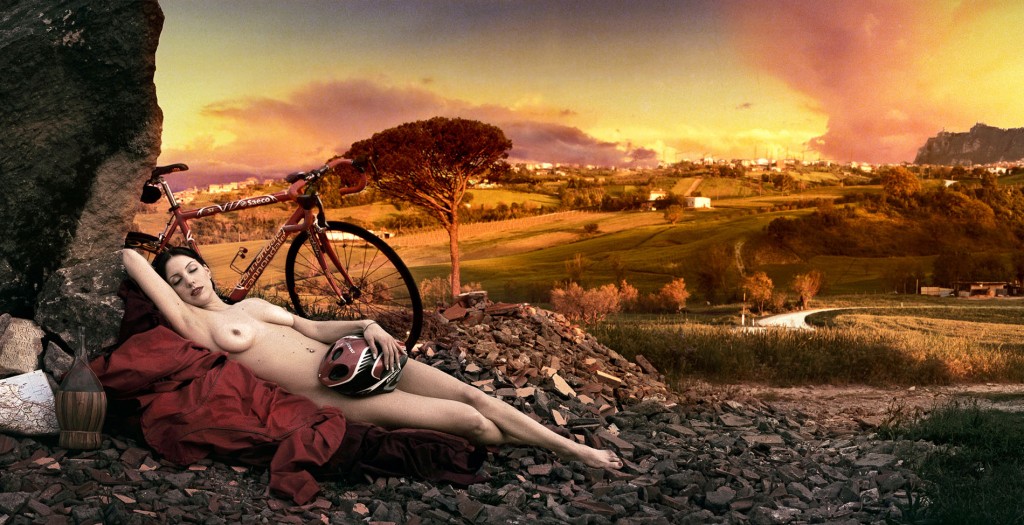 One of the greatest paintings of the Renaissance, Sleeping Venus is an unusual, not to say mysterious work, even for an out of the ordinary painter like Giorgione. The work was unfinished on his death at 34 of plague to be completed by Titian who then went on to paint similar Venuses of his own.

Many of Giorgione’s paintings are full of arcane symbolism carried out for unknown patrons deeply immersed in Hermeticism – the Sleeping Venus is no exception with its leaden sky, and its veiled references to foreseeing the future. 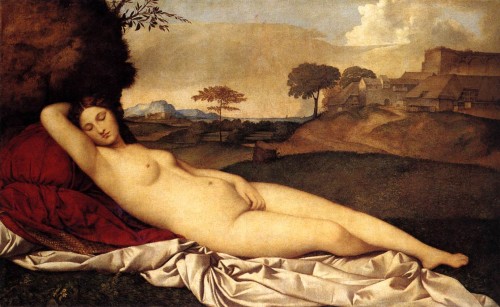 This was one of the paintings that I absolutely had to do, but where was I to find my own Venus? None of the women who had come forward for the original casting remotely fitted the bill until one evening quite by chance I met Arianna, a lawyer from the tiny republic of San Marino. What is more, not only did she have the right face and the right figure, but she was also a keen cyclist providing her own red Cannondale racing bike (so expensive she was unwilling to tell me how much it cost!) to lean against the rock in the photo.

So Arianna was perfect, but what about the landscape? In the original painting the landscape was very important , in fact Giorgione was one of the first painters to place figures in a genuine rather than a stylised landscape. In Sleeping Venus the sky is oppressive, the atmosphere threatening, the effect is mysterious.

The slightly sinister outline of San Marino high on an escarpment reminded me of the painting. The miniscule republic, famous as a fiscal paradise, has massive banks and is currently under seige from the European Union. I drove around the valley below until I happened upon a rock, just like the original, surrounded by the rubble of a demolished farm building. San Marino with its distinctive fairy tale trio of castles is perched on the mountain in the distance -but on the ridge below can be seen silhouetted against a livid sky, the concrete buildings, cranes and pylons of a monstrous modernity laying siege to the enchanted city above.