Ranting on about pork pink

I am going to permit myself a bit of a rant. Be warned, as I know I’m going to appear to be a snob, so whether you agree or not please leave a comment.

The Italians say that you need a signore to make good wine – in other words a peasant isn’t capable. Well I’d go a bit further. Whereas even certain insects and certainly many animals like birds and even the humble octopus possess a well documented aesthetic sense – the peasant has none: I suppose it’s just not necessary. So it’s particularly heart rending to see  the newly enriched Italian peasantry carry on their devastation of a particularly beautiful part of the world. Concrete reigns supreme of course, but it goes beyond that. Here is a case in point.

This old farmhouse on the lovely shores of Lake Bolsena has recently been converted into an Agriturismo. The building was certainly shabby, but it had a charm that comes from being constructed of local materials and allowed to weather for scores of years. The faded paint is a limewash mixed with ground up brick dust – a technique developed by the Romans. Back then building materials were never wasted and demolished buildings were recycled. Bricks and tiles were easily cleansed of their mortar, which didn’t stick like today’s cement, to be gathered into  huge piles. The one in Rome is a veritable hill – the Monte dei Cocci in Testaccio near the Protestant cemetery where Keats lies – both are well worth a visit.

The stuccoed buildings of Italian cities and rendered farmhouses were painted with this recycled material which in time weathered,  the colours mellowing to leave darker shades under the eaves and windowsills, but also the lime was washed out by the rain leaving the quartz crystals from the brick dust on the surface. In the evening the setting sun reflects in the quartz and the building appears to glow. This glow was often commented on by northerners making the Grand Tour and even gave the name to Bologna ‘La Rossa ‘ (the red) which predated its politics. 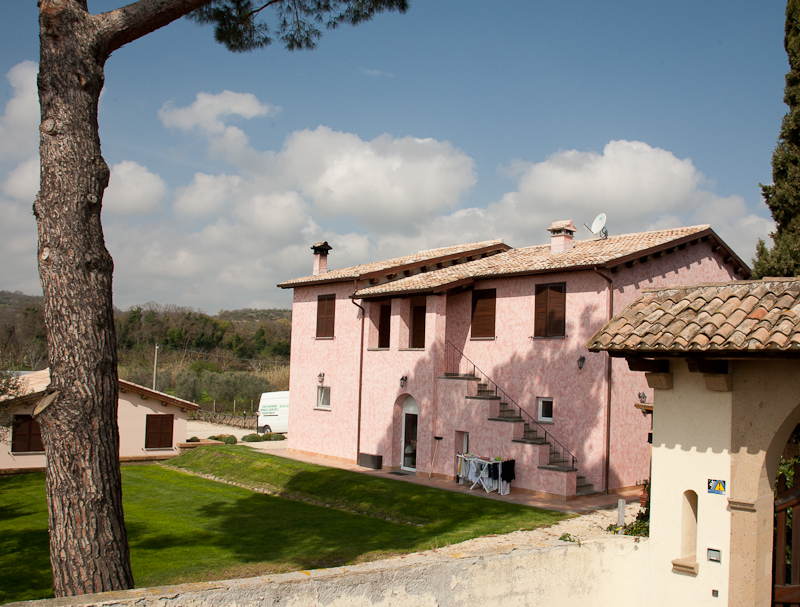 Sadly fewer and fewer of this traditionally painted stucco survives anywhere. If you see a building I suggest you photograph it for posterity and perhaps in a more enlightened age municipalities will insist that refurbished buildings be done using traditional means and local skills. This would not only increase the aesthetic pleasure of strolling around Italian cities and villages but would also provide skilled work for the locals.

The former farmhouse illustrates this perfectly: the joinery is factory produced aluminium and plastic – and white to boot. The pork pink paint is some hideously daubed acrylic on cement stucco which in  two or three years will blister and crack and bubble but will never weather in the accepted sense. The facade is festooned with fake plastic carriage lamps while the garden has been all too liberally sown with  lamps like upturned goldfish bowls to look at night like a landing pad for extra-terrestrials.

Like a throbbing pustule on the divine landscape this is a building that would not glow in the sunset unless it were on fire.