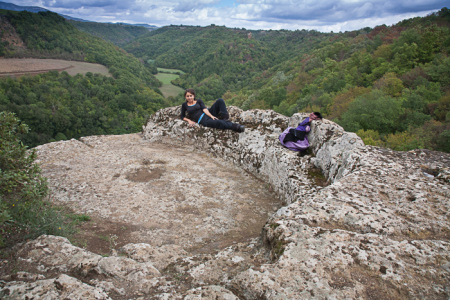 I have taken to photographing the Belle in places that I have known of for some time, trusting that the beauty of the site, what the Romans called Genius Loci, will inspire both me and the model even though I may not have a very well formed idea of what I intend to do at the outset. I set out with my model Francesca a 33 year old archeologist to a place, Orsini Park, that she had never been to but I felt sure she would love. I had not been there myself for nigh on 20 years, strange, given that it is just outside Pitigliano in Tuscany, a town I visit regularly on my photo workshops.

The park is rarely visited by anyone, in part perhaps owing to its lugubrious nick-name, Parco degli Strozzoni or Stranglers Park.  The story goes that centuries ago Count Orsini who lived with his young and beautiful wife in nearby Sorano, continued to visit his old flames in Pitigliano. Returning one day from one of his assignations and encountering his wife in the park he called her to explain her presence there. Guilelessly she replied  that she was no doubt doing the same as he, whereupon he throttled her and threw her into the ravine.

The park was designed for the Epicurean prince Vicino Orsini in 1552, contemporaneously with his better known Bosco Sacro at Bomarzo, beloved of Cocteau and Dalì; it even features in a recent film of Alice in Wonderland. 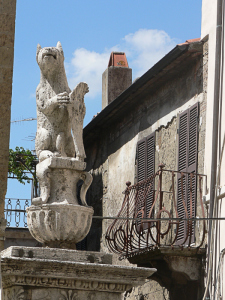 Now little remains of the fabulous sculptures, and we found the place overgrown, neglected and moodily melancholic in the colours of early October. We did a recce in the morning when I snapped these pictures, to return late afternoon a couple of hours before sunset when I reckoned the light would be better.

Two images were realised here with Francesca: Carpe Diem and This Autumn Evening, both were taken within a couple of metres of each other. I took the picture This Autumn Evening on the Belvedere which had a slight suggestion of a spiral, looking out over the valley (top picture). In Carpe Diem I took three pictures of Francesca on the carved throne from a panoramic tripod and stitched them together in Photoshop. That way I could use my 85mm prime lens rather than a wide angle which would have distorted the perspective. The bear behind was added later; he is the  mascot of the Orsini family (orsini is the diminutive of orsi, bears) and stands in the piazza of Pitigliano. I thought given that the park was once populated with giant hermetic statues his presence would add something, in fact he looks, as Mae West would have observed, pleased to be there. 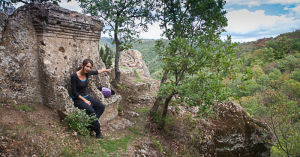 throne with a view