“In the beginning was the Word and the Word was the beginning of the end for the White Goddess. Amongst animals only man is conscious of his  place in the world, only man realises that time passes, that he is mortal. As the word took over, as Adam delved and Eve span, the superior power of the word smothered the instincts, the sun outshone the moon, but the White Goddess did not die she was eclipsed.The moon radiates no heat but does illuminate. Since time immemorial the moon has personified mystery, and the White Goddess is the mysterious power behind the creative throne. She is the poet’s muse whose ethereal power catches us unawares;  she sneaks up on us from behind the intellect, surprising us with her feminine sagacity. She may come upon us in an illuminating flash, but she has been working ever so slowly behind the scenes: quiet, unobtrusive, more modest and more intelligent than the the logical, determined, masculine brain. Complementary to the heat of the masculine, she is prescient, reflective and cool. She has to be wooed from her secret hiding place; she cannot be called on directly. She appears to us in dreams, in the semi-wakeful state, on a long walk, in our scribblings and sketches;  when we are not  thinking of anything in particular she will ambush us with a blinding revelation. But like the pale moon she can be dazzled by the overpowering bully that is the intellect. She has to be coaxed gently into revealing herself before day-breaking logic hustles her back into her lair. She is the vampire that shuns the sun.” 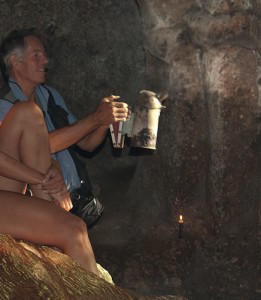 She has to be courted, she shuns the brash, direct approach, she will not be managed: she is likely to fall into your arms when you least expect her to.  The essence of creativity in any field is summoning up the white goddess.

The skill of the artist has to be painstakingly learned and requires thousands of hours practice, as experience grows and confidence increases the White Goddess who walks always with him, appears more and more, she turns thinking into knowing. But the  White Goddess can be a deceiver too, she is the Goddess of ‘wishful thinking’, she may lift her veil but she may not reveal the truth.

This is the second time I’ve taken this photo as I wasn’t happy with the pose of the previous model: this one is loosely based on Elle by Adolf Mossa. The photo was taken in 2011 at a remote spot called Poggio Conte  in Northern Latium, an abandoned church cut into a cliff probably on the site of an Etruscan temple.

Most of the frescoes were  mercilessly ripped off the walls and sold on the black market in the 1980s; thankfully most of them were recovered – the deputy mayor of the local town was responsible – for the theft, and now reside in the museum of Ischia di Castro. Some frescoes remain including these curious designs on the ceiling above the head of the model.