Patrick Nicholas Fine Art Photographer speaks about Le Belle and his approach to his female protagonists in this 30 minutes video.

Half hour documentary about photographer Patrick Nicholas shooting 5 pictures on location in Italy for his ‘Belle’ series of nude photographs based loosely on the old masters – all in the best possible taste.
Five women, five stories, about the making of their photo portraits inspired by Old Masters. Also featured is Simonetta Baletti his indispensable Make-up artist who has collaborated with him for over 15 years.
He uses amateur models from all walks of life, none of whom have modelled before. His wife Lucia also has her say.
His work has been featured in The Sunday Times magazine, Vanity Fair, South China Morning Post, Madison in Australia and many other magazines worldwide.
Made for Swiss National TV in 2007, broadcast in 2008. In Italian with English subtitles.

Some excerpts from the documentary:

Every time I had an idea I went with it, always with ordinary women. I looked for the right woman for that type of painting. They aren’t copies of famous paintings. They are stimuli for photos in which I can say something of my own, which is what painters have always done.
I’ve noticed that a man looks at the photographs and then moves on, whereas women stop and look, call their friends over; you see two or three of them in front of the photograph discussing it. They are very curious. After they often ask me questions like why did I shoot the photograph in that way and such like. This gives me the chance to say “Maybe you could do something like that too”. That’s how it happens.
I work like this: I make some suggestions and maybe the model says “I don’t know, it doesn’t seem right. Can we try like this?” Then I say what I think and in the end we reach an agreement.
They are not the classic models, but I guarantee that every woman I photograph is beautiful in her own way. They are proud women. They want to do something different in life. They are proud of themselves. Often they never thought they’d look so good in a photograph.
I studied fine arts at Art School in Oxford and then in London. Actually my degree is in cinema.
I’m a habitué of sculpture and painting exhibitions. I have lots of paintings in my head, so when I see someone I know which painting is right for them.
I’d never thought that these photographs which I shot more than anything for fun while I worked in advertising, would have been so successful. Recently they have been published all over the world from China to Portugal, Australia, England, all over the place. 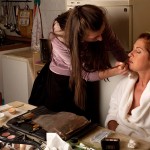 Simonetta:  I met Patrick about ten years ago. I can’t even remember. We have always got on well, we hit it off right away. You know how it is when you like someone immediately? And then he is crazy!
The Model: I think the girls are curious and are having fun too. When Patrick asked me if I wanted to be in a photograph, I was shy at first. Then I said, Why not?  I liked it when he showed me some paintings and I would suggest others to him, and the whole discussion we had before deciding which photograph to shoot I liked. 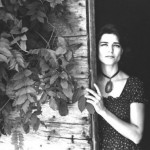 Patrick and I have been together for twenty years. I’m not at all jealous of all these women around him. It was like that when I met him. It’s a part of his work.
I think he has the ability to enter into the female spirit. I feel he is on our side………it is just that he is a man.