Though the name is  This Autumn Evening,  how I got there is something of a spiral. 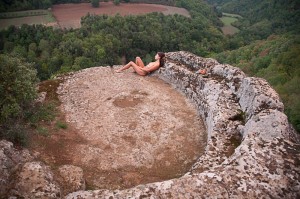 I was intrigued by the idea of a spiral suggested by the form of the belvedere. This is the original shot.

In fact the working title was Vortex. This took me to Wyndham Lewis and the Vorticists which in turn led me to the eccentric poet Ezra Pound who had named the movement Vorticism.  Pound had developed his own movement of Imagism from Japanese poetry and especially Haiku three line poetry which led me to Matsuo Bashō’s autumn poem:

“No one is travelling

Here along this way but I,

I wanted to accentuate the feeling of the vortex so  I went into a park, gathered a bunch of leaves and arranged them in a question mark spiral pattern on the ground and then photographed them from a bench. I also photographed a few falling leaves to add some depth and inserted the leaves into the picture with Photoshop. 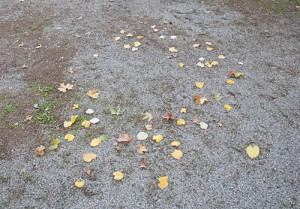 When I showed Francesca my model the finished image she gleefully noted the spiral and showed me her spiral ring and necklace given to her by her boyfriend as an engagement present.

A curious spiral relationship exists between myself and Pound. He taught at the Regent St Polytechnic where I was to study 70 years later and we frequented the same pub, The Yorkshire Grey, mentioned in his Cantos. Years later in 1996 I was invited to hold an exhibition at a romantic mediaeval castle in Merano, in northern Italy by friends of Mary Rudge, the daughter of Olga Rudge the violinist and Pound’s mistress.

I was very excited by the thought of meeting Olga, by then une grande dame of nearly 101. My van struggled up the Alps weighed down by the glass framed photographs, all too much for my cheap tyres bought in Prague resulting in a double blow out. We had to be towed off the autostrada and delayed for hours, not reaching Merano till that night. We were welcomed by a tearful Mary, Olga had died that afternoon at 3.00 PM.

I photographed her lying in the castle chapel, a photo of her young self on a side table. “People” Mary said ” aren’t so sympathetic when you lose your mother at such an advanced age, but  in some ways it’s harder to bear – we had been friends for such a long time.”

For more information about the place in which This Autumn Evening was shot click here.