In Ovid’s Metamorphoses, Apollo, the god of music and poetry, was afflicted by an infatuation for the beautiful nymph Daphne. He pursued her relentlessly until, unable to escape his clutches, she was transformed into a laurel tree by the river god Peneus in order to save her from capture. A popular subject during and after the Renaissance, perhaps this is the first photographic version.

The most famous Daphne and Apollo was sculpted by Bernini while only 24 in 1622 for his patron Cardinal Scipione Borghese. The astonishing thing about the Renaissance and Baroque is not so much the proliferation of gifted artists, but the propensity of the rich and powerful to invest in living artists: the enlightened commissioners, men not only of education, culture and taste, but disposed to try out the untried – risk takers  with a nose for genius. Bernini’s Daphne is in effect a double metamorphosis from woman to tree and from marble to leaping life. 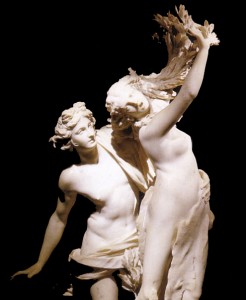 No one before him had shown the potentially plastic nature of marble, it was a material not so much solid as delicate, soft rather than hard – he transcended his material. At the unveiling the guests of the cardinal were left aghast. Perhaps there has not been a reaction similar until our own times when we are rendered speechless by the whiff of formaldehyde and unmade beds, dazzled by necrological diamonds.

For three years in the mid-nineties we were a creative triangle: photographer, model Nadine – more muse than model – and sculptor Giorgio Bevignani,  working on a series of projects in which the woman was always transformed – a series of metamorphoses not only for her, but for all three of us.

Daphne was created in the studio using soft steel wire and metal leaves all of which was hung from the ceiling and physically attached to the head of the model, it must have been extremely uncomfortable and rather unnerving, so I add bravery to the list of qualities possessed by Nadine.

Giorgio has gone on to create extremely elaborate sculpture involving hanging objects lit by ultraviolet light. Daphne’s wire laurel tree was Giorgio’s first sculpture to be hung from the ceiling, it still hangs, rusting, from the ceiling of Giorgio’s studio.

Of all the images we created this was the most essential and thus became my symbol, a distillation of what I do. I have used this image since 1995  on my letterheads, business cards and subsequently on my website home page.

Another famous Daphne composed not at the dawn of a career, but in the twilight of a long creative life, is by Richard Strauss who saved some of his most memorable music to the last.  Bernini and Strauss both managed to pace themselves in careers spanning over 60 years. To listen to the last aria of Daphne is to realise that genius is ageless.