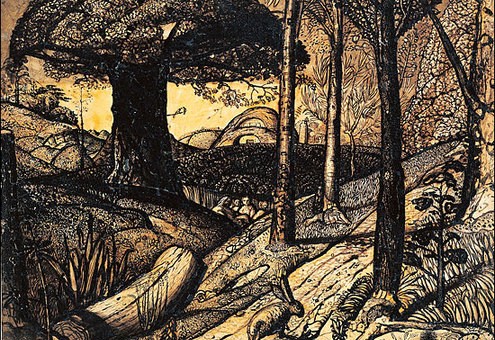 Do artists still work from poetry? In the past it was common for a painter to be inspired by the poets, but is there poetry in Hirst’s The Physical Impossibility of Death in the Mind of Someone Living’ (AKA The Pickled Shark) ?

I ask this as I have just finished a biography of Samuel Palmer by Rachel Campbell-Johnston, a book as brilliant as one of the artist’s small paintings of which it was said that ‘in a half-lit drawing room it  seems luminescent’. At times I was so moved that I had to put the book the down: rather the opposite of what is usually considered a positive review.

Palmer was a deeply religious man and was imbued not only with the message, but with the poetry of the bible. His favourite poet from childhood to old-age was Milton and in his last years he was drawn from seclusion to illustrate his Penseroso;  Virgil was also a powerful force in his long creative life. He lived in a peculiarly poetic age when powerful voices composed around him: Keats (with whom he was practically a neighbour in London), Shelley, Wordsworth, Colleridge, Byron, the Brownings, Tennyson and William Blake whom Palmer knew and was profoundly influenced by.

In their early years The Ancients, the group of painters that formed around Palmer, had come under the spell of the poet, painter and visionary William Blake, a man who reacted against the materialism of the age, one might say over reacted – in conversation with a friend  about the vastness of space he had remarked in a matter of fact way typical of the man, that space was not vast at all, ‘it is false, I walked the other evening to the end of the earth, and touched the sky with my finger.’

Palmer, though hardly recognised in his lifetime had a profound influence on 20th century British painters like Sutherland, Piper and especially Paul Nash but also on Yeats who paid a poet’s compliment to the painter with ‘The lonely light that Samuel Palmer engraved, an image of mysterious wisdom won through toil.’

Palmer did what many consider his best work in his youthful Shoreham years, but though afflicted by loss, worn low by lack of recognition, and bullied by his successful father in law the painter John Linnell, found his muse again late in life. He did not live too long as critics have churlishly suggested. He found a patron at the age of 60 who commissioned him to illustrate Milton’s ‘Penseroso’ – again art (in this case etching) and poetry fused in some of the best work he ever created. The Penseroso was a journey with out end as he died before completion, still working aged 76.

It is this hopelessly unscientific vision of the world that the romantic poets and composers as well as the painter Palmer share with Blake, a world where religion and mythology dovetail with the rational, the modern and the material; where metaphor can make us feel more than fact. As Palmer wrote at the end of his long life about truth lying ‘at a fixed centre, midway between its two antagonists Fact and Phantasm.’

I am going out tonight to a beautiful wheat  field sown haphazardly with ancient oaks near Bolsena hoping to add another picture to my Belle series. The cornfield slopes down towards Lake Bolsena which I hope will relect the moon. My head will be full of Samuel Palmer, Blake and C°. But woe! I shall miss Spain vs Italy.