On a recent visit to Paris I thought I must see Marat’s original bath tub in which he was stabbed by Charlotte Corday on July 13, 1793, in the Grévin Wax Museum.

The tableau, one of the oldest in the museum, purports to show the scene immediately after the stabbing. The bathtub, which is impossible to see in David’s painting, shaped like an enormous tin boot, looks surprisingly small for a bath. Marat looks like a purulent snail squeezed from its shell. 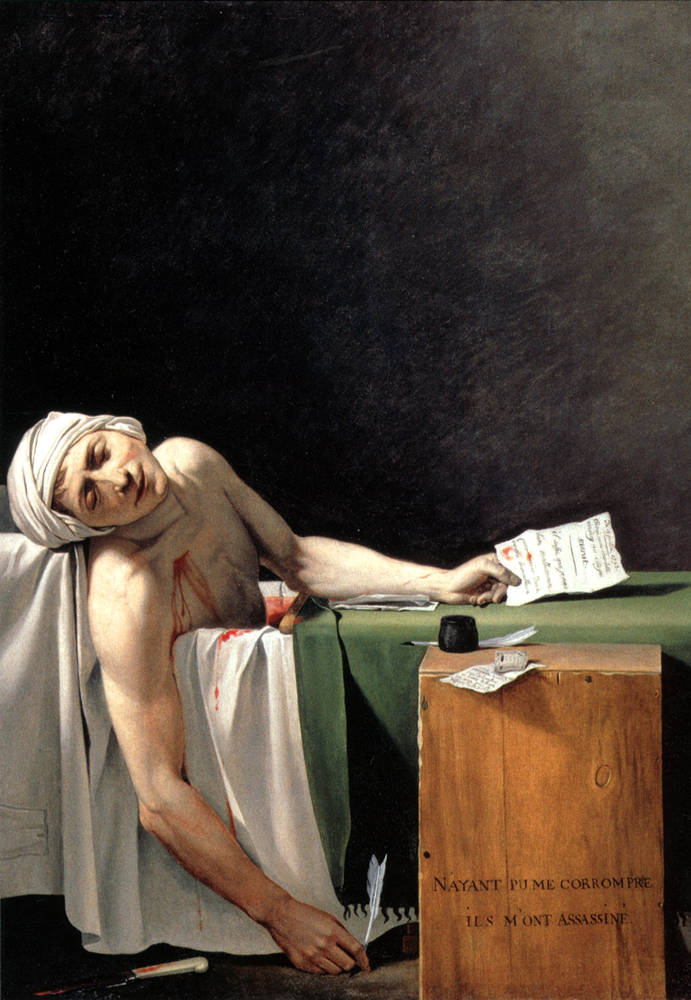 The room, which was sketched by Mme Tussaud herself when she came to make the death mask for Marat, was much more opulent than in the David painting above, it had expensive wallpaper amongst other haute-bourgeois furnishings. The Grévin Museum tableau, however faithfully follows the myth propagated by the David painting and is almost as spartan as the legend of Marat, man of the people, required – though it does not include the proletarian detail of the small patch on the sheet near his elbow. Mme Tussaud arrived so quickly on the murder scene that Corday was still there and had not even been arrested. 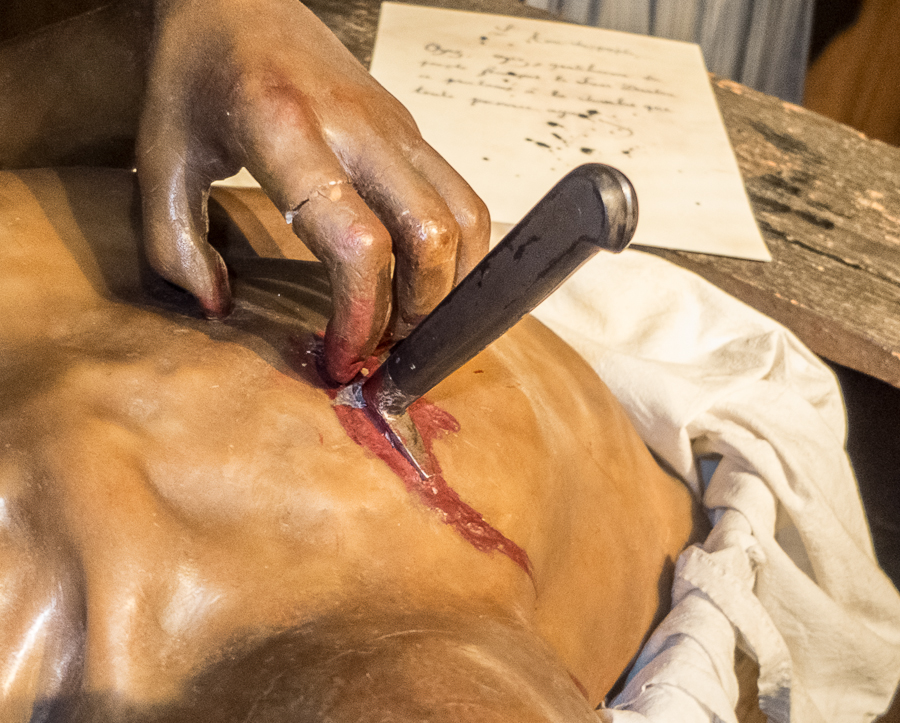 Corday’s knife is supposed to be the genuine murder weapon, but is it?

Corday’s head, like Marat’s, was cast by Mme Tussaud after death – she found it in a basket in the Madeleine cemetery. Both original casts are in Madame Tussaud’s, London.

When David was called to paint the scene from life so to speak, putrefaction in that hot July meant that he was soon forced instead to paint Tussaud’s wax tableau rather than the original cadaver in situ. David has prettified the corpse and sanctified the man; Marat never  attractive  either physically or politically, had been severely disfigured by an irritating skin disease, he may well have looked similar to Silvio Berlusconi’s most recent portrait.

David rendered the background a neutral grey-green with no details, and certainly no chintzy wallpaper. I followed suit when I photographed my version. However some years later I decided to reprint using a different shot from a Polaroid negative that I had shot to test the light. This showed the cowshed in which I had set my model. Like David I used a high overhead light to illuminate the scene, though my source was a large artificial soft box flash. 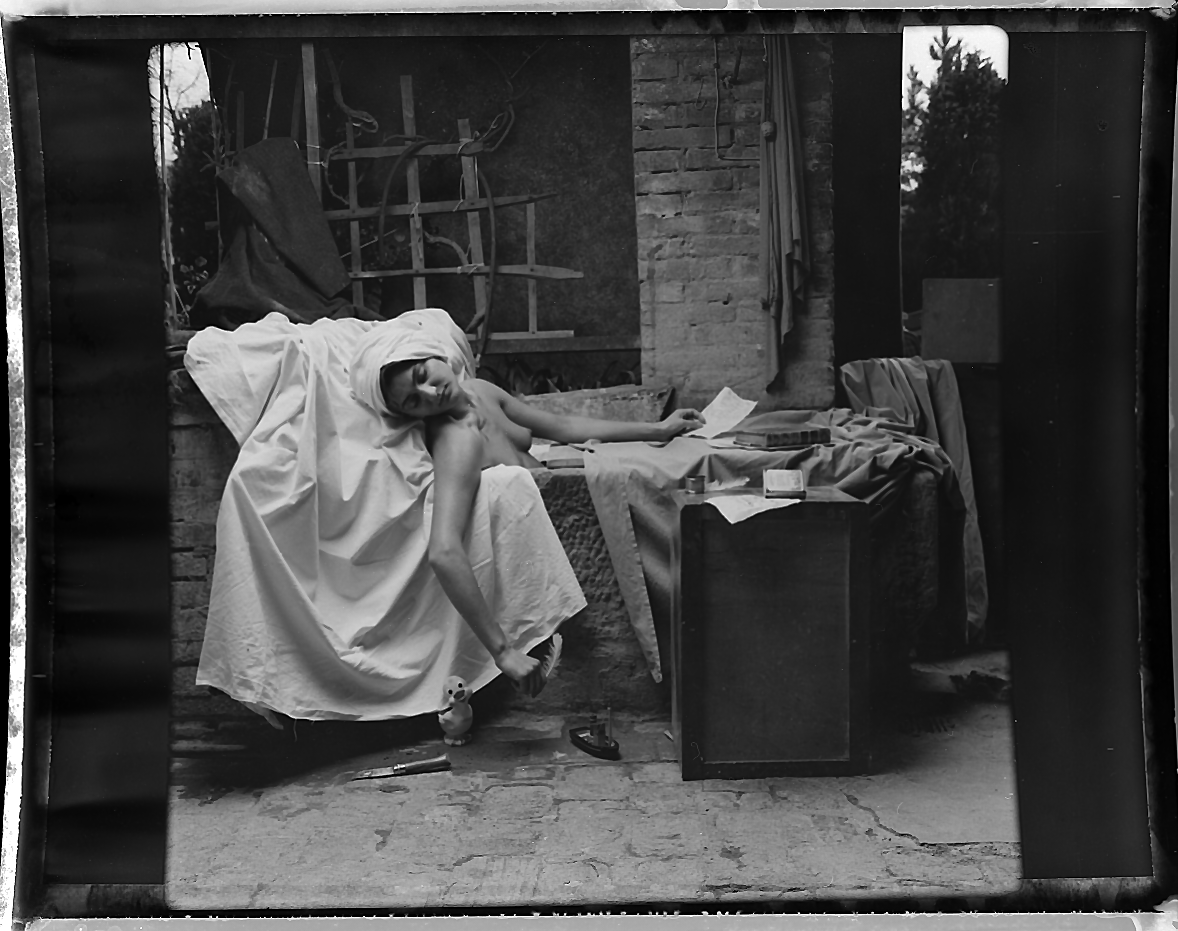 The Corday set in a Bologna cowshed, 1988

Charlotte Corday calmly waited arrest after the deed. She was guillotined 4 days later, but she had had enough time to summon the portrait painter Hauer to execute her portrait in gaol. It shows the tenor of the woman that she looks so calm.

The tub was acquired for the museum in 1885 for the sum of 5,000 francs (a considerable sum, about €15,000) from a parish priest, Father Rio of Sarzeau, who said he inherited it from an old spinster named Mademoiselle de Saint-Hilaire whose father had bought it from a scrap merchant in around 1805 in rue d’Argenteuil near the Tuileries.

My 10 year old daughter did not think it was gruesome enough; I will try the London Dungeon out on her next time.