Back in October 2007 I set up a picture based on a painting by the French academic painter Gerome called The Judgement of Phryne. I had to shoot 5 pictures in the course of a week as a Swiss TV documentary crew were following both me and my models for a film entitled Woman Portraying Art. Normally speaking I do about 5 pictures a year. 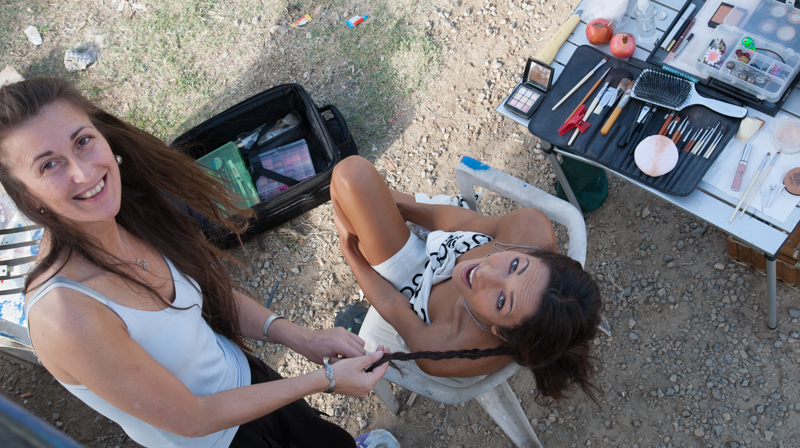 make-up, Mary looks up nervously at the photographer

The Phryne picture was dreamed up on the spur of the moment because my original idea involving a shoot in a minamalist flat in Orvieto fell through owing to the lack of availability of the location during that week.

The model was a young Sardinian, Mary, who had passed by my gallery one day and agreed to the original idea. However, when I informed her of my plan B, that she would be standing naked clad only in a fishing net in front of a group of old fishermen, she balked.

Eventually I talked her round and all went well till the make up stage and casting her eye over the audience she began to get cold feet again. On this occasion it was Simonetta the make-up artist who soothed her nerves. I was unaware of this until I heard her comments in the documentary. 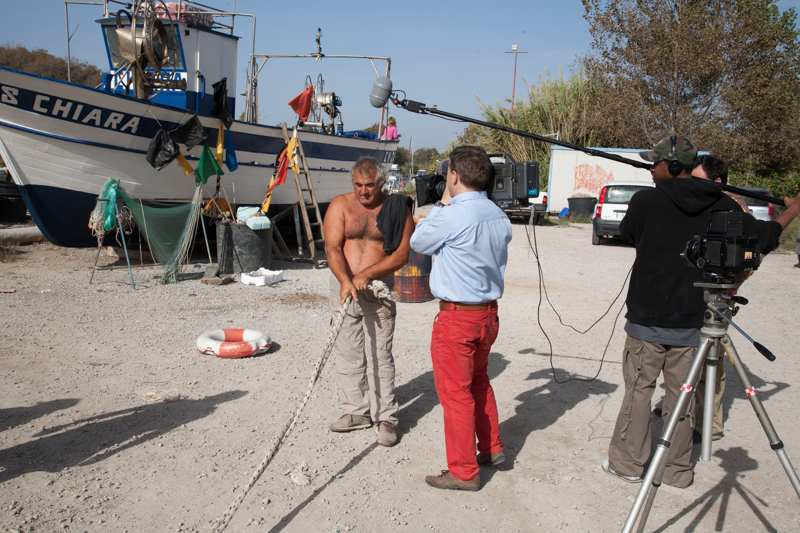 the skipper helps prepare the set

I had rounded up the local matelots picking the most weathered faces I could find in the little fishing port of Monalto di Castro. 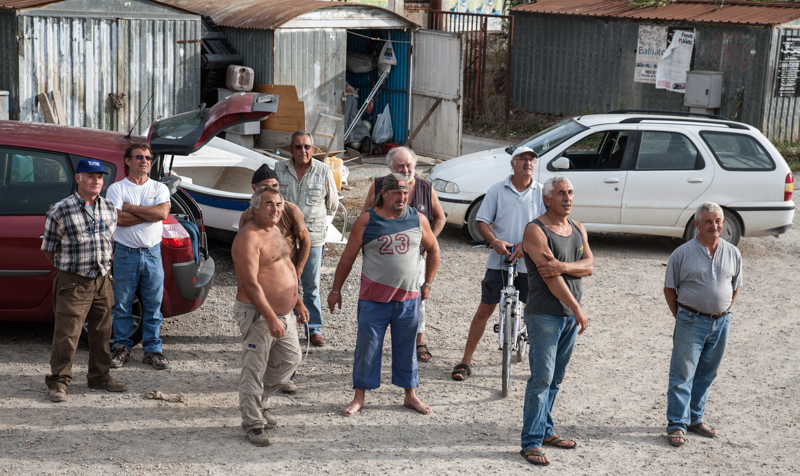 the motley crew crew look on during make-up

The man in the garibaldiesque red shirt whom I found mending his nets in a hut oblivious to the film and photography crew and the general ballyhoo, took some persuading to leave his piscatorial chores to take part.
I told the men that they were in for a nice surprise, but no more. The model was held literally under wraps until the moment came.

The documentary crew were turning over, my 6×7 film camera was at the ready with ten shots, I shouted ‘via!’ and the captain pulled away the tarpaulin with a flourish worthy of a ring master.

I took six shots as fast as I could with my aged mechanical Mamiya, but the element of surprise was everything, only the first shot worked.

Sadly, since that October day in 2007 two of the fisherman, white bearded Yogi and the old fellow in the red shirt, have gone to a better place.

The wooden fishing vessel Chiara too has gone, washed out to see in a massive flood in November 2012. The prow was washed up in Sardinia and now serves as a shrine near the sea shore… an impressive piece of flotsam dedicated to those in peril on the sea. 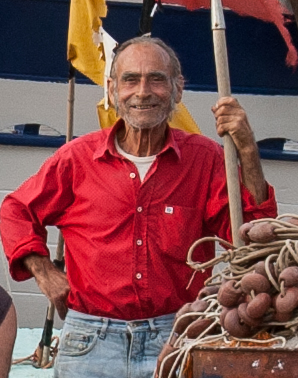 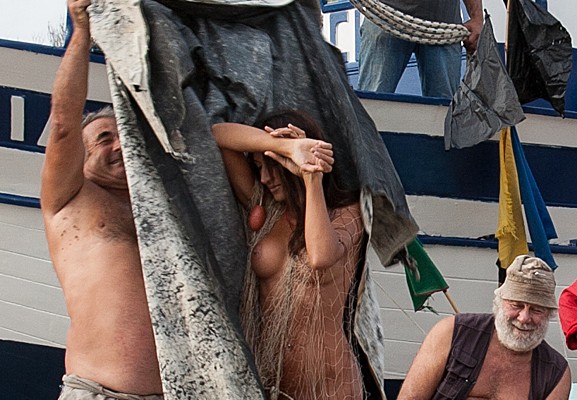 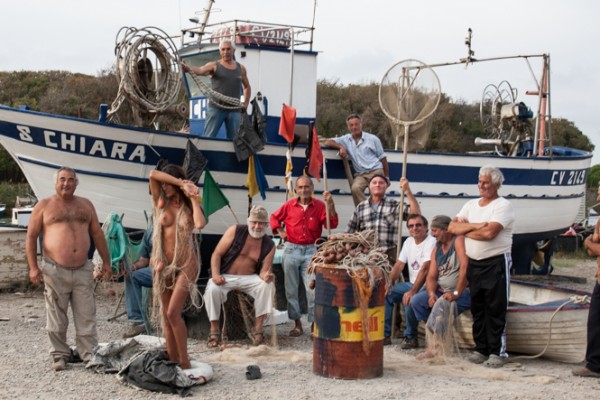 Out-take: the surprise has gone. 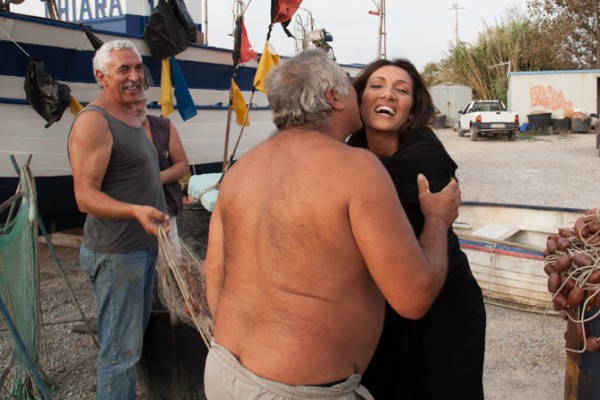 A kiss from the skipper. 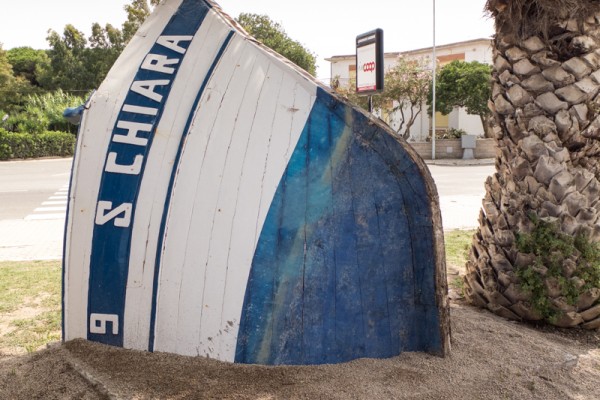 Bow of the good ship Santa Chiara in 2013 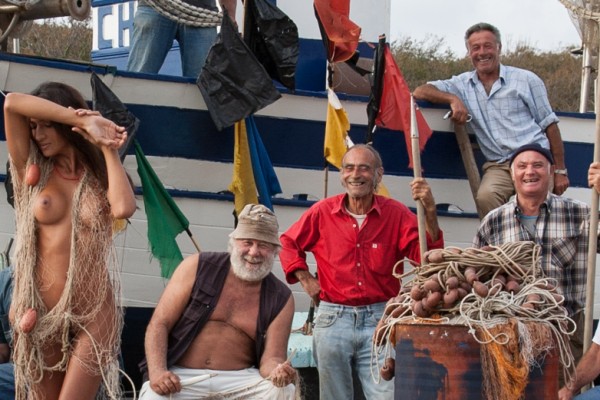 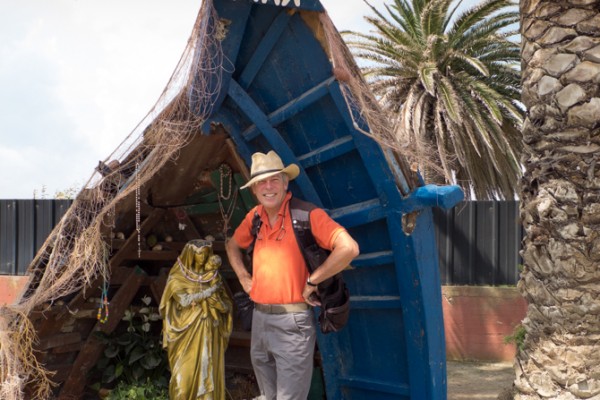