The location for this picture is a nymphaeum, the so called Diana’s Bath in a cliff beneath the Pope’s summer palace at Castel Gandolfo on the shores of Lake Albano near Rome. The ravages of time and the depredations of robbers as well as legitimate excavators have left it a dripping, mysterious ruin with wonderful acoustics.

It was constructed for Domitian, an efficient Roman emperor, but a ruthless, cruel and violent man. He delighted especially in Naumachia, mock naval battles involving real combatants most of whom were slain or drowned. He may well have watched the gruesome spectacle on the Alban lake from the shelter of this grotto. The place would also have been used for Dionysiac rites, known to the Romans as bacchanalia. The androgynous, semi-divine Dionysius represents everything that is risky, chaotic, beyond reason and unexpected; perhaps for this reason the nymphaeum was also used for wedding ceremonies.
The nymphaeum, unlike a temple or church, is not a purpose build construction, but a natural grotto embellished with statues, fountains, mosaics and marble. Here there was a mosaic depicting Diana in a chariot. The grotto’s acoustics and recognisably natural environment enhanced the wildness of the rites that Domitian would have held here, a heady mixture of theatre, concert, dance and most likely, orgy.

The square of the nymphaeum and the round circle in the floor suggested to me Leonardo da Vinci’s Vetruvian Man named after Vetruvius the principal architect of Caesar Augustus. However, the figure in the drawing is dynamic whereas my model is perhaps more suggestive of the Anima Mundi as she lies passive within the circle, waiting and seeing.

Vetruvius, follower of Pythagoras and author of a famous treatise on architecture, stated that buildings should be based on human proportions. His most famous axiom is that a building should be sturdy, useful and beautiful.* 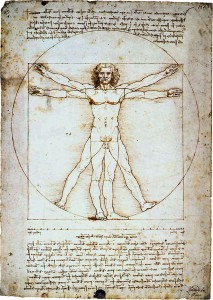 Da Vinci’s drawing is an illustration of this principal, the beauty of the drawing is in the squaring of the circle, something that is in fact mathematically impossible.

Pythagoras was more than a mathematician, he was a philosopher and mathematics is in a way one of the arts. The most common ways of describing a mathematical proof could equally be applied to art, namely that it is: succinct; involves a minimal amount of previous assumptions; is surprising; has original insights and should easily be generalised to solve a family of similar problems, this last maxim is perhaps less applicable to art, but perhaps could be used to describe an art movement.
However, what marks out maths from many other art forms is that it is not passive: a mathematical proof is like a joke in that you have to ‘get it’.
Some mathematicians see beauty in a theorem that establishes a connection between other areas that formerly seemed to be unconnected: this they refer to as deep.
In this age of the grossly high priced artistic trivia of un-made beds, pickled cows, hanging horses, elephant dung sculpture, never ending self portraits all called “untitled”, interminable videos, oversized reproductions of kids’  toys, installations with their incomprehensible catalogues, there may wall be more art in the “Monstrous Moonshine” ** theorem than in most galleries of contemporary art. In fact modern art seems to have lost sight of beauty as an ingredient of art altogether.

As biophysicist Rosalind Franklin said to Watson and Crick on seeing their DNA model in 1953 “It’s too beautiful not to be true”.

* firmitas, utilitas et venustas
** “Monstrous Moonshine, the unexpected relationship between finite simple groups and modular functions”; Conway and Norton, 1979. Perhaps one day their names will become as familiar as Gilbert and George though I suspect not in the art world.

The statues that stood in the niches, or at least some of them, survived until the 17th century when they were found by a local peasant. He brought the monks from the nearby monastery to see, a mistake. They promptly had him smash them as ‘demonic’. Pope Alexander VII, Fabio Chigi, friend of Bernini  and notable patron of the arts, was furious.