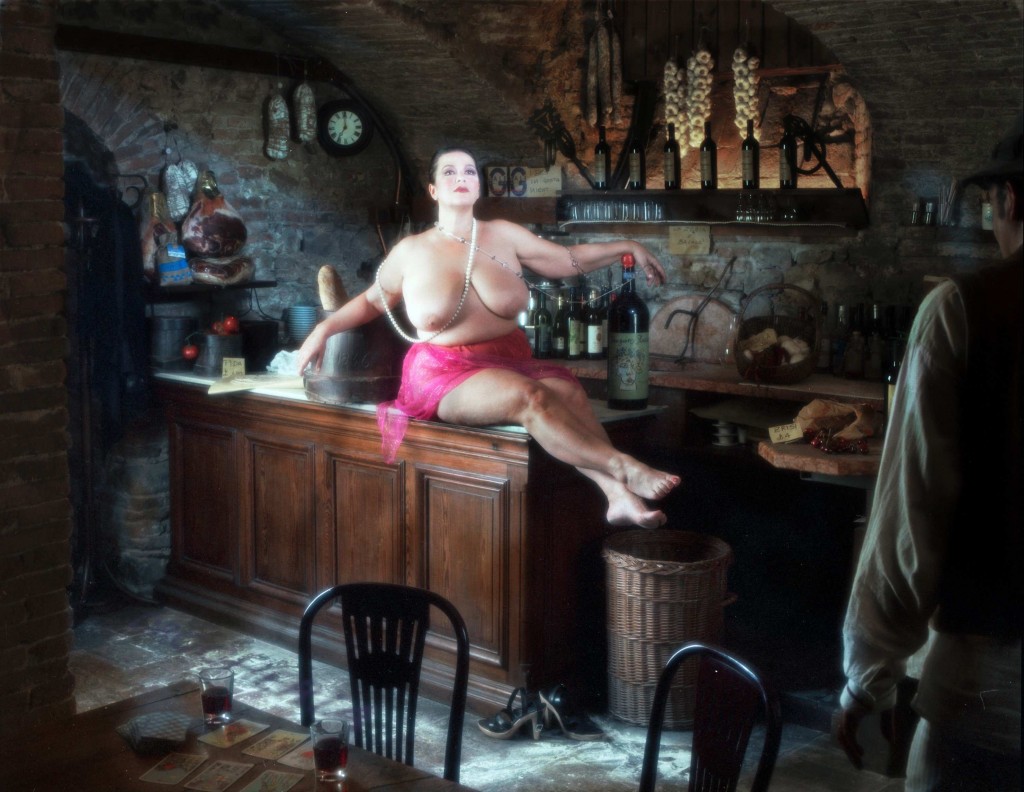 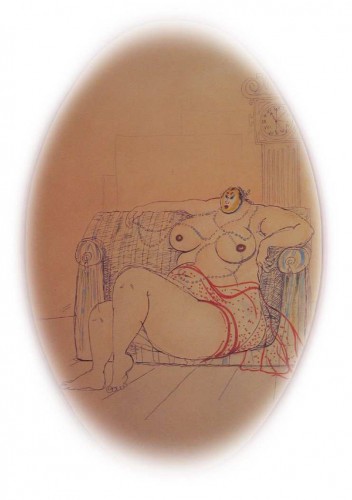 What was the attraction in big women for Fellini? It wasn’t that he disliked thin ones – far from it! Yet most of his films have room for an over sized Junonic actress: Anita Ekberg in La Dolce Vita and the unforgettable, matronly tobacconist who overwhelms the young Fellini in Amarcord with her massive bosom. This is the one photo of the series that is not based on an old master painting, but rather on a sketch and a character in a film by a modern master of cinema. Here she is, the generous shop-keeper, the store closed, bathed in moonlight, putting on a private show for a privileged customer.
Perhaps Fellini’s fervid imagination did not see these oversized women as objects of desire but instead transformed them into an image of primeval fecundity, an earth goddess.
My photo is a felliniesque pastiche based partly on La Sangiovesa a great big drawing of an enormous woman with a tiny head, whereas the set is inspired by the scene of the suffocatingly big bosomed tobacconist in Amarcord.
The tobacconist has become a grocer of the nineteen-fifties. Prices are in lire and we had fun setting everything up with all those cheeses, Parma hams and fresh fruit — what a delightful salami smell our set had! I hung an old clock on the wall, an enigmatic presence taken from the original Sangiovesa drawing.
Our model Maria Teresa brought something personal, her set of Tarot cards, which may be seen in the foreground on the table lending a magical element to the scene. The shop is dark and closed, the splendid shopkeeper is bathed in moonlight falling through the shop window, a cold mysterious light, the only touch of colour is the mauve of the woman’s veil — no longer a shopkeeper, but the white goddess whose presence permeates all the religions of the Mediterranean. She glows like an enormous pearl in this gloomy barrel-vaulted space not unlike the belly of the whale in Fellini’s Casanova.