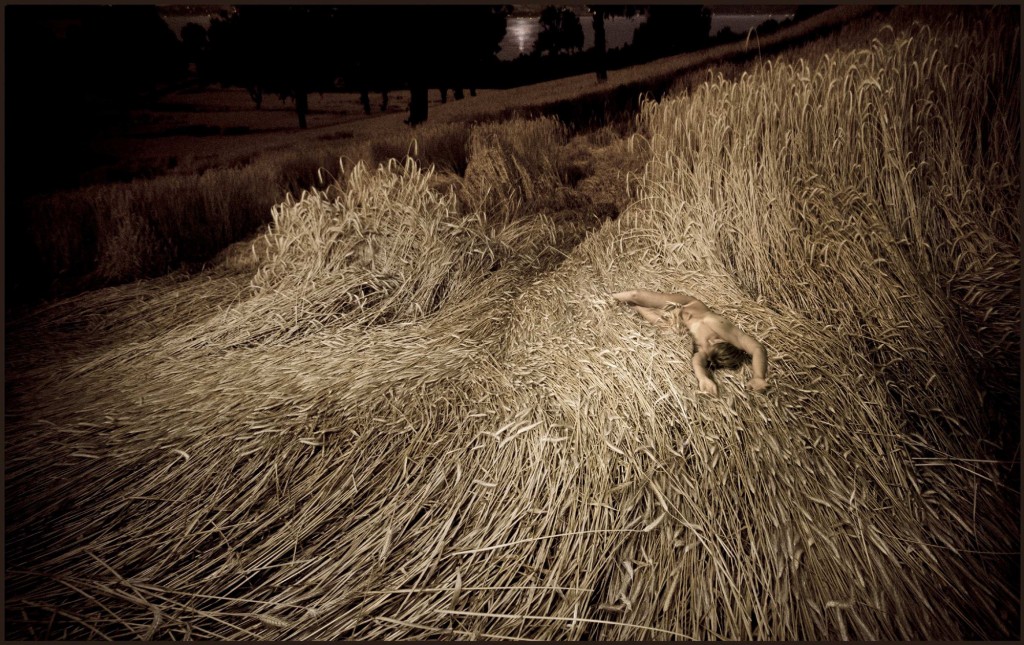 Place is ever so important to artists and Lake Bolsena is a unique place. A large and deep volcanic lake north of Rome with two islands it was the centre of the Etruscan cult for over a thousand years and here catholics believe not one, but two miracles occurred. A meadow slopes down towards the lake sown haphazardly with ancient oaks, the wheat beaten down in patches by a hailstorm in May. Alongside lies the sublimely melancholic ‘cimitero degli inglesi’ as the locals call the Second World War cemetery.

I have been deeply moved by Samuel Palmer’s small sepia landscapes since I was at school. As a youngster he lived in the village of Shoreham just outside London for seven years in the 1820s – a place where, as he put it, ‘ he mused away some of the best years of his life.’ These were the visionary years of a Christian mystic who turned his back on satanic, smoking London, and went ‘to see the world in a grain of sand, and to see heaven in a wild flower, hold infinity in the palm of your hands, and eternity in an hour.’ His mentor William Blake visited him and his friends (who called themselves ‘The Ancients’) in Shoreham and is reputed to have written ‘Jerusalem’ there.
Although I have been most influenced by Palmer’s sepias from the 1820s his life-long friend and fellow Ancient, Edward Calvert has also been an influence. The high Anglican Tory Samuel Palmer did not approve of the paganism (and nudity) of Calvert; this is a shame as both Christian and pagan mystics are moved by the same subtle force.
I am particularly touched by the evident joy in Calvert’s pictures, sadly an emotion often lacking in Christian art although both Blake and Palmer did find a serene happiness in nature.
I have called this picture Saggezza Misteriosa in homage to Palmer. It comes from the Irishman W.B. Yeats who paid a poet’s compliment to the painter with, ‘The lonely light that Samuel Palmer engraved,
An image of mysterious wisdom won through toil.’ 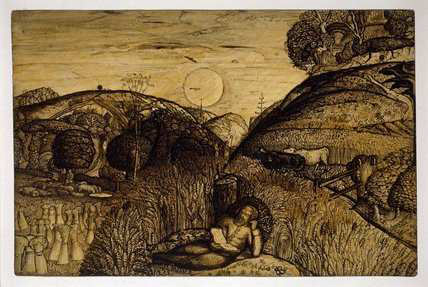 The Valley thick with Corn (1825) Palmer

A harvest moon hung over the lake when I came to shoot my picture on Sunday 1st July, afraid that the field would be harvested on the Monday;
unfortunately it was the night of the final between Spain and Italy.
It’s not easy shooting in the dark at the best of times especially if there is a figure in the foreground, and a cornfield presents its own particular problems. The moonlight however was eerily beautiful so I didn’t want to use flash. It was difficult to focus with an 85mm lens in the dark so I settled on my cheap and cheerful Sigma 18mm lens, which is anything but sharp, at f2.8. The exposure was a minute long.
The model Emanuela, whom I barely knew, was extremely patient. She expressed a wish to be photographed in or near water as she loves aquatic sports. I felt that the cornfield looked rather like a rough sea and directed her to pretend she was swimming through the waves. The straw
was tinder dry, prickly and difficult to lie on as it would snap under her weight and in various spots we tried she disappeared from view!
I used a pocket sized torch to bounce a bit of extra light off the still standing corn onto the model. I wanted to create an effect of s
wimming through the grain so I chose the area where the hail had done the most damage creating a swirling, maritime motion. In the quiet we could hear animals scuffling about, presumably mice. In fact after a couple of hours, there was an ominous silence all around us, Italy obviously hadn’t scored a goal.