The websurfer is inspired by Boucher’s voluptuous Odalisque of 1745 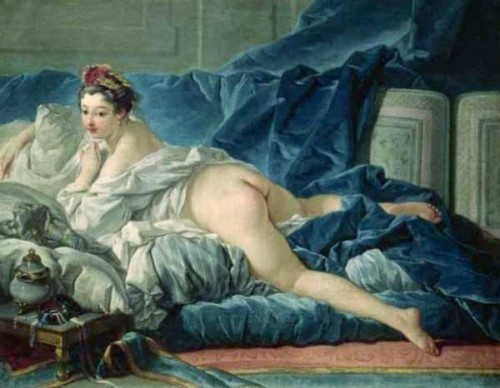 This was also the Age of Enlightenment, the age of “Les Liaisons Dangereuses“, the calm before the storm of revolutions in America and France.

Even though Boucher pandered to the tastes of his aristocratic patrons, he was admired by the free-thinking critic Diderot for his genre painting, although when he saw the Odalisque he revealed a puritanical side, accusing Boucher of “prostituting his own wife”. Indeed, Diderot was that curious mix of liberal and puritan that seems typical of the age on both sides of the Atlantic. He is best known as the compiler of the famous Encyclopédie, at enormous cost, financially, and emotionally, he was even incarcerated for three months. Diderot believed that knowledge was power and that an encyclopaedia could help free France from the dead hand of the Ancién Regime.

The Encyclopaedia was sold in instalments from 1750, often clandestinely after the printing license was withdrawn, and was not completed until 1765 – even then in a mutilated form. No doubt his energy and sacrifice helped not only bring down the old regime in 1789 but laid the foundations of an open society, a hero for our own times in which the mass media are in the hands of powerful individuals with immense political power.
My young model Elisabeth from Weimar is searching Wikipedia for information, indeed it was she that gave me the idea for Web Surfer when she told me that she was ‘couch surfing’ around Europe. Who knows what effect Wikipedia.com and Wikileaks.org, not to mention all the other information available on the net, will have on our relationship with our governors.

It was said that “Boucher is one of those men who represent the taste of a century, who express, personify and embody it.” Perhaps his contemporary Diderot too was responsible for the Zeitgeist of the age with his Encyclopedia. Who would you chose to personify ours? Julian Assange (Wikileaks), Silvio Berlusconi, Mies van der Rohe, Norman Foster, Charles Saatchi, Bernie Madoff, Lady Gaga, Freddie Mercury, Erin Brockovich, Homer Simpson?