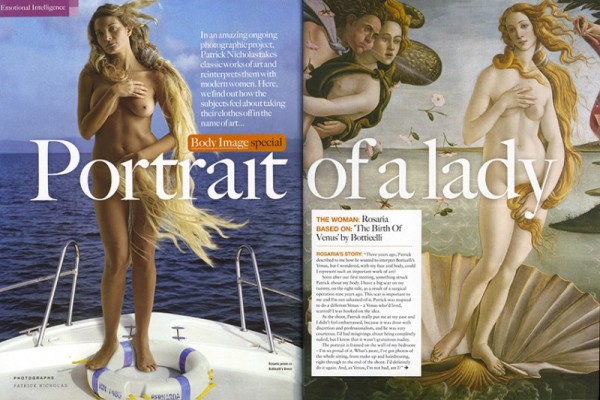 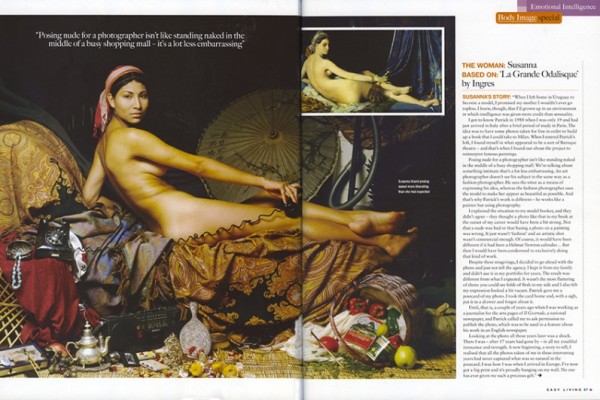 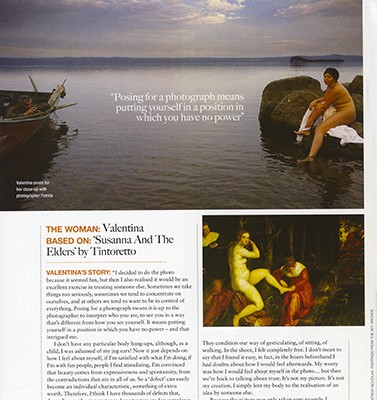 In an amazing ongoing photographic project, Patrick Nicholas takes classic works of art and reinterprets them with modern women.
Here, we find out how the subjects feel about taking their clothes off in the name of art…

THE WOMAN:  Rosaria
BASED ON:  ‘The Birth Of Venus’ by Botticelli 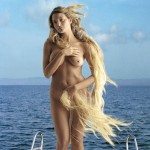 Based on ‘The birth of Venus’ by Botticelli

ROSARIA’S STORY:  “Three years ago, Patrick described to me how he wanted to interpret Botticelli’s Venus, but I wondered, with my face and body, could I represent such an important work of art?
Soon after our first meeting, something struck Patrick about my body. I have a big scar on my tummy, on the right side, as a result of a surgical operation nine years ago. This scar is important to me and I’m not ashamed of it. Patrick was inspired to do a different Venus — a Venus who’d lived, scarred! I was hooked on the idea.

At the shoot, Patrick really put me at my ease and I didn’t feel embarrassed, because it was done with discretion and professionalism, and he was very courteous. I’d had misgivings about being completely naked, but I knew that it wasn’t gratuitous nudity.

The portrait is framed on the wall of my bedroom — I’m so proud of it. What’s more, I’ve got photos of the whole sitting, from make-up and hairdressing, right through to the end of the shoot. I’d definitely do it again. And, as Venus, I’m not bad, am I?”

THE WOMAN:  Susanna
BASED ON:  ‘La Grande Odalisque’ by Ingres 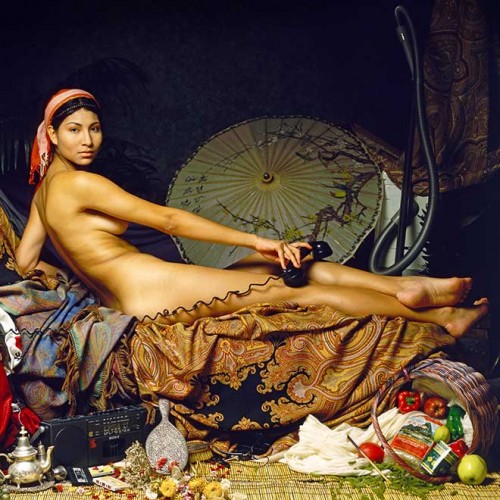 Based on “La Grande Odalisque” by Ingres

SUSANNA’S STORY:  “When I left home in Uruguay to become a model, I promised my mother I wouldn’t ever go topless. I knew, though, that I’d grown up in an environment in which intelligence was given more credit than sensuality.

I got to know Patrick in 1988 when I was only 19 and had just arrived in Italy after a brief period of study in Paris. The idea was to have some photos taken for free in order to build up a book that I could take to Milan. When I entered Patrick’s loft, I found myself in what appeared to be a sort of Baroque theatre — and that’s when I found out about the project to reinterpret famous paintings.

Posing nude for a photographer isn’t like standing naked in the middle of a busy shopping mall. We’re talking about something intimate that’s a lot less embarrassing. An art photographer doesn’t see his subject in the same way as a fashion photographer. He sees the sitter as a means of expressing his idea, whereas the fashion photographer uses the model to make her appear as beautiful as possible. And that’s why Patrick’s work is different — he works like a painter but using photography.

I explained the situation to my model booker, and they didn’t agree — they thought a photo like that in my book at the outset of my career would have been a bit strong. Not that a nude was bad or that basing a photo on a painting was wrong. It just wasn’t ‘fashion’ and an artistic shot wasn’t commercial enough. Of course, it would have been different if it had been a Helmut Newton calendar… But then I would have been condemned to exclusively doing that kind of work.

Despite these misgivings, I decided to go ahead with the photo and just not tell the agency. I kept it from my family and didn’t use it in my portfolio for years. The result was different from what I expected. It wasn’t the most flattering of shots: you could see folds of flesh in my side and I also felt my expression looked a bit vacant. Patrick gave me a postcard of my photo. I took the card home and, with a sigh, put it in a drawer and forgot about it.

Until, that is, a couple of years ago when I was working as a journalist for the arts pages of Il Giornale, a national newspaper, and Patrick called me to ask permission to publish the photo, which was to be used in a feature about his work in an English newspaper.
Looking at the photo all those years later was a shock. There I was — after 17 years had gone by — in all my youthful innocence and strength. A new beginning, a story to tell; I realised that all the photos taken of me in these intervening years had never captured what was so natural in the postcard. I was how I was when I arrived in Europe. I’ve now got a big print and it’s proudly hanging on my wall. No one has ever given me such a precious gift.”

THE WOMAN:  Valentina
BASED ON:  ‘Susanna and the Elders’ by Tintoretto 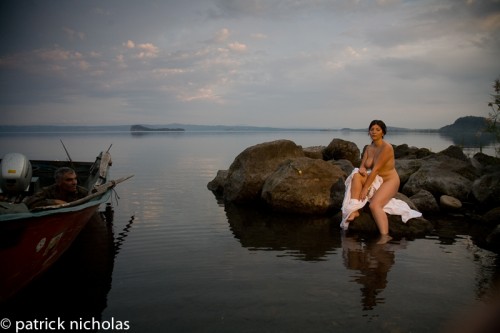 Based on ‘Susanna and the Elders’ by Tintoretto

VALENTINA’S STORY:  I decided to do the photo because it seemed fun, but then I also realised it would be an excellent exercise in trusting someone else. Sometimes we take things too seriously, sometimes we tend to concentrate on ourselves, and at others we tend to want to be in control of everything.

Posing for a photograph means it is up to the photographer to interpret who you are, to see you in a way that’s different from how you see yourself. It means putting yourself in a position in which you have no power — and that intrigued me.

I don’t have any particular body hang-ups, although, as a child, I was ashamed of my jug ears! Now it just depends on how I feel about myself, if I’m satisfied with what I’m doing, if I’m with fun people, people I find stimulating. I’m convinced that beauty comes from expressiveness and spontaneity, from the contradictions that are in all of us. So a ‘defect’ can easily become an individual characteristic, something of extra worth. Therefore, I think I have thousands of defects that, depending on the circumstance, become reasons for complexes or reasons for pride.

On the shoot, I did feel very naked. What we wear, our make-up, hairstyle, are nothing if not psychological masks. They condition our way of gesticulating, of sitting, of walking in the shoot, I felt completely free. I don’t mean to say that I found it easy, in fact, in the hours beforehand I had doubts about how I would feel afterwards. My worry was how I would feel about myself in the photo… but then we’re back to talking about trust. It’s not my picture. It’s not my creation. I simply lent my body to the realisation of an idea by someone else.

Because the picture was only taken very recently, I haven’t got a copy yet, although I’ve seen it on an email.
I don’t know if I’d hang it up in the house. Maybe my mum would like to have it!” 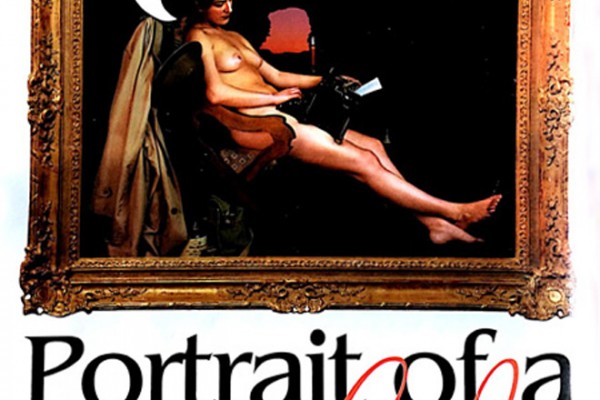