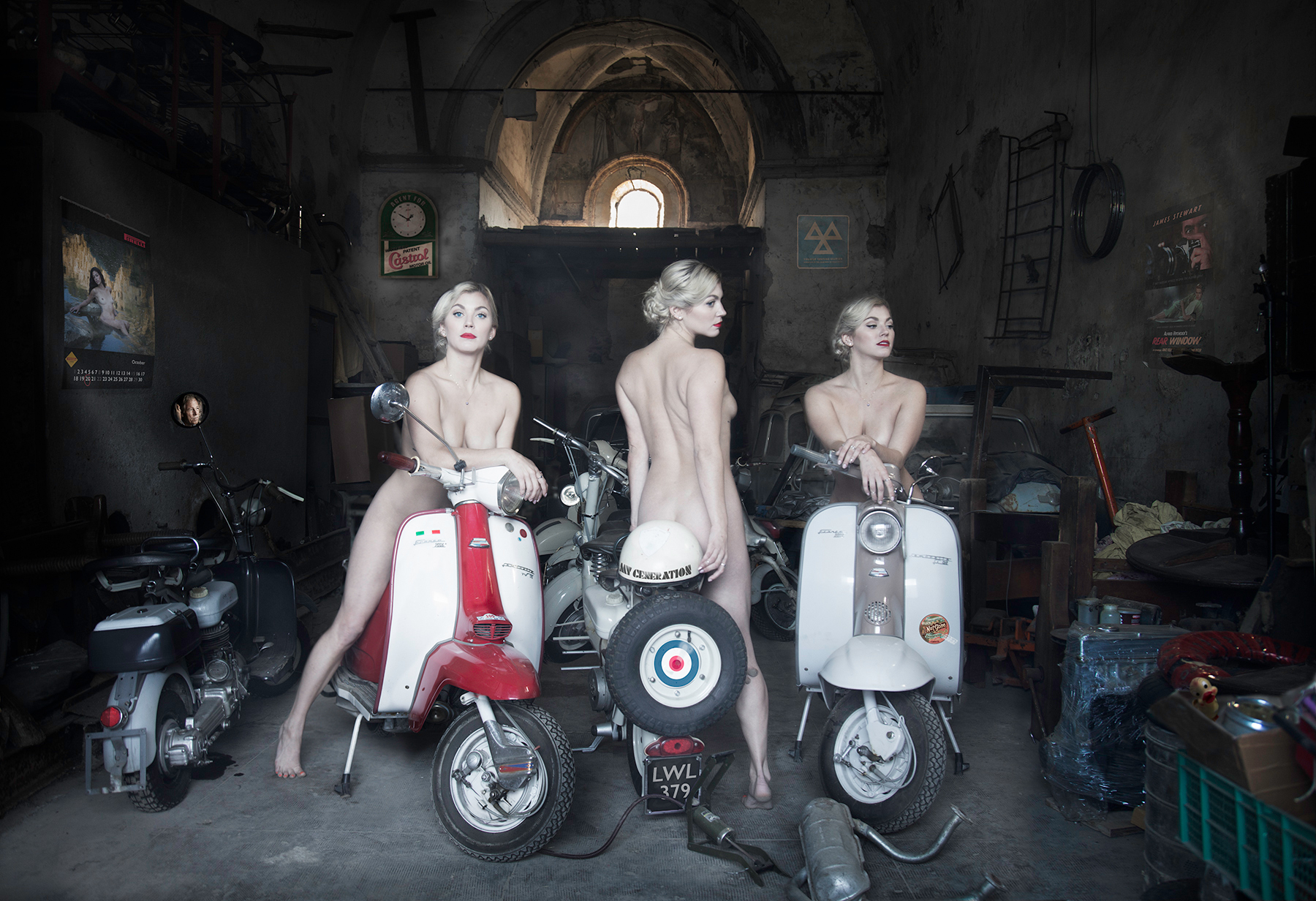 The Three Graces is one of the most popular subjects of all time in painting and sculpture.

The Three Graces are not the same as the three beauties in The Judgement of Paris, the goddesses Aphrodite, Hera and Athena, but three muses who represent the finer, elegant, graceful and beautiful things in life. These were the the sort of values that working class lads from London’s East End aspired to, firstly with the Teddy Boys in the Fifties who dressed up in Edwardian frock coats and then in the Sixties with the Mods. A car was beyond the means of the youngsters so the Lambretta was the scooter of choice for the Mods, not for them the greasy Triumphs and Nortons that got the suit wet and dirty and messed up the hair.

I vowed to take this picture in about 2010 after my friend Lucio first showed me a collection of old Lambrettas he and his friends were restoring in an old deconsecrated church outside Orvieto. But the problem was it was well nigh impossible to get three women together on the same day for the shoot. Eventually I thought why not use one woman with a certain likeness to Grace Kelly so that I could call it The Three Graces? After all Botticelli had used one model for his Three Graces, the beautiful Simonetta Vespucci who also modelled for Birth of Venus.

Burne-Jones used just one model for his Three Graces, his former lover for whom he held a candle for the rest of his life, Maria Zambaco. The Three Graces was painted fifteen years after the affair ended. Maria was one of the three Anglo-Greek ‘stunners who modelled for several London artists and were known collectively as the Three Graces; the others were Marie Spartali (whose sister Cristina modelled for Whistler as the Principesse de Porcelaine and later lived in Orvieto), and Aglaia (the name of one of the Greek Graces) Coronio.

I despaired of finding the right model for my Three Graces until one morning Kelsey from Canada strayed away from a yoga retreat into my gallery in Orvieto. Two days later we did the shoot at the end of October. She seems to glow in the dark with a glacial, sensual, elegant charm.

Grace Kelly was one of Hollywood’s most elegant stars, Cary Grant’s favourite working partner while Hitchcock called her ‘the epitome of the femme fatale’ which suggests she had a darker side, ‘She’s a volcano covered with snow’ he said of her. She was not as frigid as she looked, according to Gore Vidal she almost always had the leading man.

Like Hitchcock I managed to give myself a small cameo role in the picture.